The woman in this double portrait wears a tall-crowned, narrow-brimmed, ribbed straw hat with a dark-coloured ribbon, wrapped diagonally around its high sides and forming a band at its base,a towering ostrich plume fixed to the left hand side, and additional small feather or floral trimmings. Her fair hair is left naturally curly and unpowdered. She wears a ’round’ gown or one-piece ‘chemise’ dress made of plain coloured cloth with a wide neckline’ trimmed with a flat ruffled or flounced collar, and filled-in with a starched ‘buffon’ neckerchief, or ‘fichu’ which has been bunched up, over the bust, and swathed high around the neck, covering the shoulders to create an elegant ‘pigeon-breasted’ silhouette, with both ends tucked into the gathered bodice. The gown has elbow-length, cuffed sleeves and a wide sash defining the waistline, and falls in soft folds to the ground just revealing the tips of a pair of pointed shoes. The woman also carries a large shawl, wrapped closely around her torso below the waist, perhaps to conceal pregnancy. Gathered gowns were easily adapted to changes in body shape resulting from pregnancy and nursing. Originally popularised in white muslin, coloured ‘chemise’ gowns like this also appear in European fashion plates between the years 1784-86.

The man in this double portrait wears the military uniform of a Lieutenant in the New South Wales Corps, denoted by the single epaulette on his right shoulder, and comprising a long-tailed [red] coat with light-coloured [yellow] button-back facings and sleeve cuffs (this style was replaced by a short jacket after 1796) worn over a matching waistcoat and white, frilled-front shirt with a black neckcloth, and long white/grey pantaloons which may be a type of undress uniform. His black top hat, with a white-tipped [red] feather plume fixed to the left hand side, was the forerunner of the ‘shako’ (introduced in about 1800). He wears low cut flat shoes, or pumps, rather than boots and carries a sword on his left hip – the hilt and curved blade are just visible – suspended from a single white shoulder belt worn across the body.

This image is believed to originate from an album of drawings belonging to Felipe Bauza (1764-1834) who sailed to New South Wales in 1793, as part of the Spanish Scientific Expedition (1789-94) to Australia and the Pacific, under the command of Alessandro Malaspina. The Spanish navy arrived in Sydney on 12 March 1793, to observe the British settlement, and departed a month later on 13 April. Bauza made several sketches during the expedition but these images could also be the work of José Cardero, a young, self-taught artist, who joined the expedition in 1791. In 1962 Bauza personal collection (gathered unofficially and perhaps secretly during the voyage) was offered for sale, and a few of the drawings relating to Australia were purchased by the SLNSW for the Dixson Galleries (Sydney Morning Herald, 7 April 1962, p.14). Among the works acquired were these two drawings, described at the time of their purchase as ‘Australia’s first fashion pictures’. 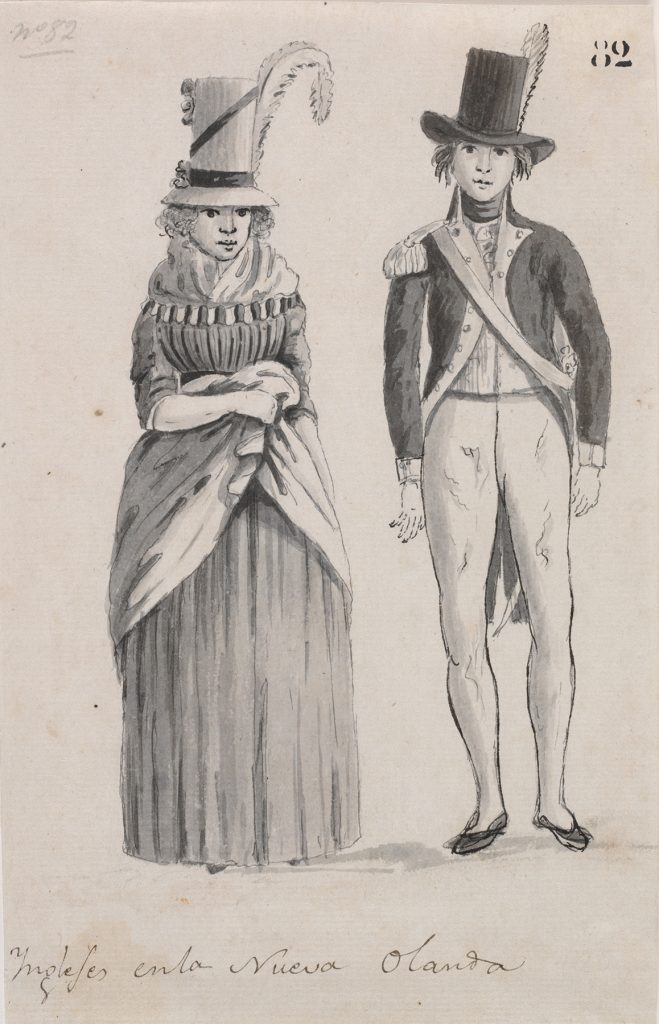