This group portrait shows members of the King family in a relaxed domestic setting, seated companionably around a table and posed to reinforce traditional gender roles- the elder daughter assists her mother with the care of a younger child while the father imparts knowledge to his son.

Captain King (far right) wears a British Royal Naval uniform (pattern 1795-1812) comprised of a blue wool double-breasted, brass buttoned dress frock coat for a captain (under three years seniority) edged in gold lace with a stand collar, button-back lapels and epaulettes at the shoulder, the sleeves with ‘mariners’ cuffs trimmed with a single row of gold lace to denote rank, worn with a single-breasted waistcoat, over a linen shirt with a high collar, frilled cuffs and a white cravat, and knee breeches in white wool with ribbed stockings. His white hair is possibly powdered and tied-back.

Mrs King (far left) wears a full-skirted, long-sleeved white muslin morning dress with a wrap over front, edged with a narrow flounce, forming a V-shaped neckline and tied at the waist over a high-necked white muslin ‘chemisette’, or undershirt. Her bandeau headdress is tied around her natural curls and she wears fingerless mittens.

Philip Gidley King (1758-1808), his wife Anna Josepha (1765-1844) and daughter Elizabeth (1797-1856), then their youngest child, left England for NSW in 1799. Captain P.G. King had received his post-captain’s commission on 5/12/1798, and was appointed third Governor of NSW (1800-1806). The King family were not reunited with their two elder children, Anna Maria (1793-1852) and Phillip Parker (1791-1856), until 1807. It seems to have been common practice for officers departing for overseas service to have a portrait made, though family portraits like this one are less common. Robert Dighton (c.1752-1814) was an English portrait painter, printmaker and caricaturist who was regularly commissioned to paint portraits for military families. 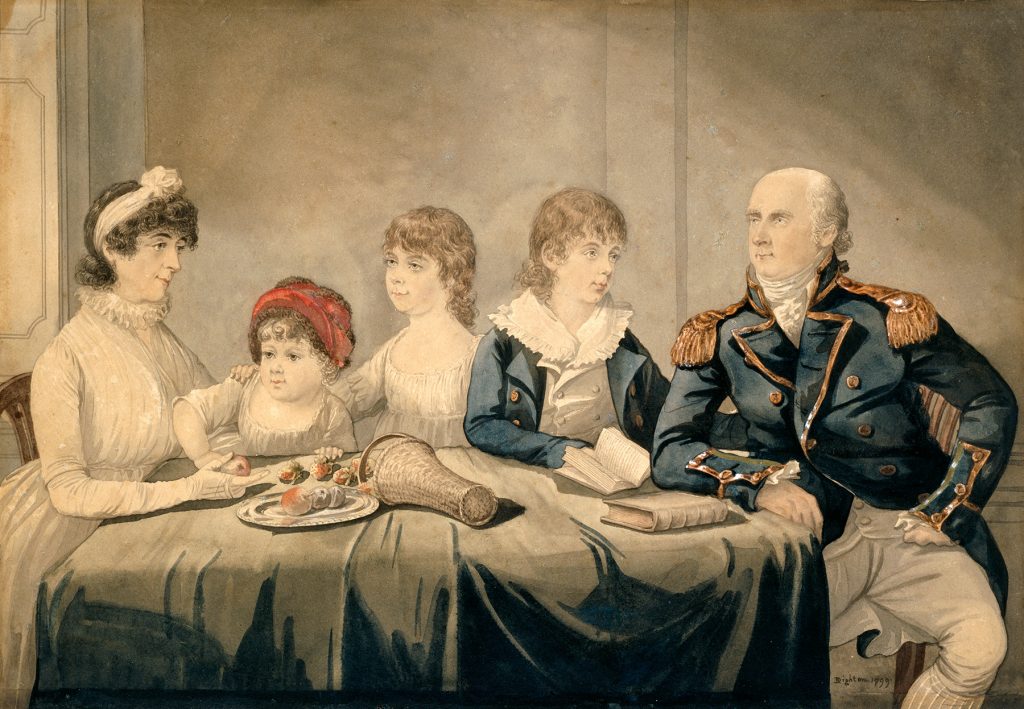