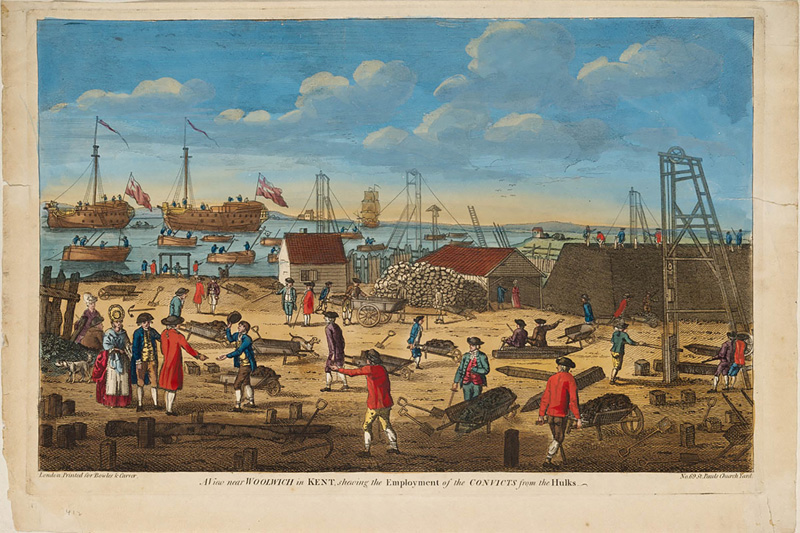 This print shows two prison hulks moored on the River Thames at Woolwich, near Kent, to the south east London. The hulks were usually anchored near dockyards, or garrisons, in order to utilise the prisoners as a ready-made work force. Prisoners were routinely put to work for up to 10 to 12 hours per day. This scene shows a series of small boats at work on the river and, in the foreground, more convicts are engaged in hard labour on shore – shifting coal in wheelbarrows and pile driving (far right) – under the direction of overseers.

Despite being fitted with leg irons, the prisoners seem to wear ordinary clothing items (short jackets, waistcoats, breeches, shoes, stockings and tricorne hats) rather than standard issues of ‘convict apparel’ (grey jacket, waistcoat, knee-breeches, long stockings, striped shirt, checked handkerchief, thick shoes, and sheep-skin cap), though any actual uniformity in dress could be masked by the hand-colouring of this print.

There are also several better-dressed figures in this scene including several men who wear long-tailed coats, and it is interesting to note the presence of two women on the far left. Both females wear a fashionable style of garment known as a ‘polonaise’ which was popular from the third quarter of the 18th century (ca.1770). It was a type of over gown with tapes sewn inside to enable the skirt to be drawn up at the back, over an underskirt, creating an attractive, bunched-up effect. This picturesque style was often worn, as shown in this print, with a forward-tilted, shallow-crowned, flat straw ‘bergère’-style (French for shepherdess) hat.

Between 1776 and 1802 decommissioned ships, or hulks, were fitted out as temporary floating prisons to house male prisoners awaiting transportation to overseas penal settlements following cessation of British convict transportation to the American Colonies. All English prison hulks were operated by private ship owners under contract to the British government. After sentencing, prisoners were dispatched to a ‘receiving’ hulk, where they were inspected and cleansed before going on to a convict hulks. There they were assigned to a mess (food ration) group and allocated to a work gang while they waited transportation. Some convicts could pass their entire sentence (up to seven years) in the hulks waiting for a ship to transport them overseas. 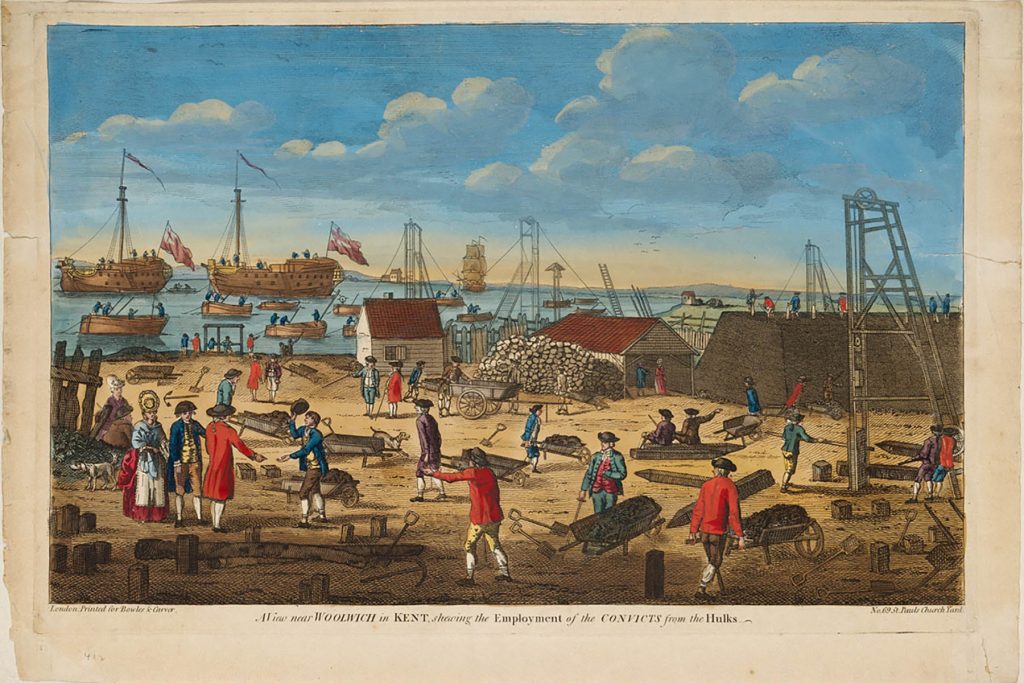