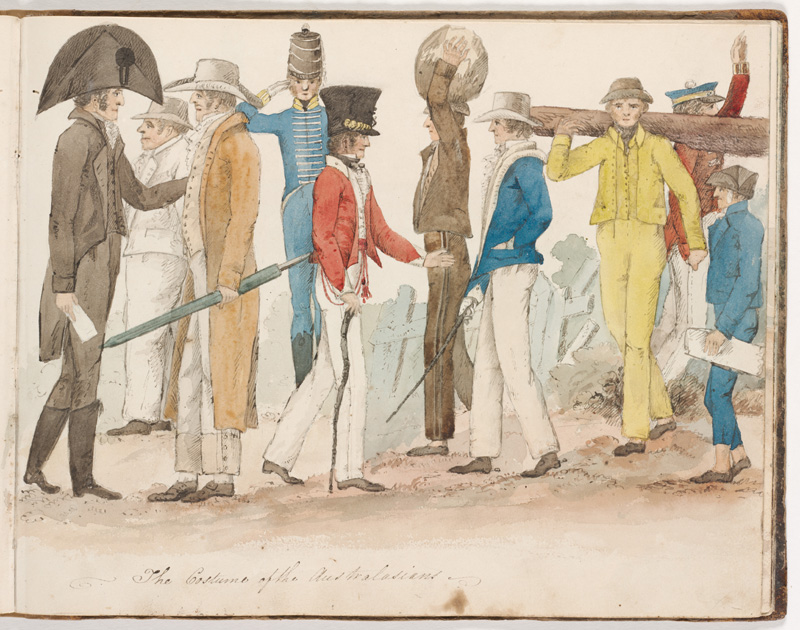 1817 – The Costume of the Australasians

This scene depicts colonial men of various types as seen by the artist on the streets of Sydney in about 1817. It shows the different strata of colonial Sydney society – civil and military officers, free settlers, soldiers, emancipists and serving convicts – in an apparent easy co-existence.

The ten figures, from left to right, include:

1. a government official wearing a large bicorne hat, trimmed with a black ribbon rosette, and a three-piece suit of dark cloth comprising a tail coat and waistcoat, buttoned over a white linen shirt with a pleated front, his trousers tucked into knee high, tasselled hessian boots. This could be Governor Macquarie’s secretary, John Thomas Campbell, in civilian dress;

2. an emancipist or ‘ticket-of-leave’ man in a loose-fitting, grey ‘slop’ suit worn with a frill-fronted shirt, low crowned hat and brown leather shoes;

3. an ‘exclusive’ or free settler carrying a large green umbrella and wearing a wide-brimmed hat (perhaps made locally of cabbage tree palm) with a long, brown ‘duster’ coat over a buff-coloured waistcoat with a stand collar, and a white linen shirt with a pleated, frilled front and a pointed collar, above wide-legged white [moleskin] trousers with buff-coloured, deep, side-buttoning cuffs and brown shoes buckled over the instep. NB: Large green umbrellas, probably imported from India, were regularly listed in the sales advertisements of Sydney retailers at this time.

4. a saluting bandsman in a tall shako with looped rows of white plaited cords (caplines) across the front and tassels hanging down one side, wearing a blue woollen uniform of short, braided jacket with a yellow lining, stand collar and cuffs, and matching trousers tucked into tall hessian boots;

5. a soldier wearing the uniform of the 48th regiment with its distinctive ‘shako’ with badge and gold braiding, and a red woollen jacket with white collar, cuffs and facings, over a linen shirt with stand collar, pleated, frilled front and a black neckcloth, his white trousers with side braid, marked at the waist with a red sash with looped corded and tasselled trim (perhaps attached to a message pouch). He also carries a ‘shillelagh’ (typically made from a stout knotty stick with a large knob at the top) perhaps displaying an association with Ireland;

6. a government convict (perhaps privately assigned) carrying a large burden on his head and wearing the standard issue leather cap with a brown ‘slop’ suit, brown leather shoes and no stockings.

7. another free settler wearing a fine [imported] straw hat, and a short blue jacket with white cuffs and rolled back edges (perhaps sheepskin lined) forming a collar, over a white waistcoat with a turn-back collar and a linen shirt with frilled front and stand collar, and white trousers. He also carries a riding crop or swagger stick and wears brown leather boots fitted with silver spurs;

8. a government convict carrying a log across his shoulders wears a three-piece woollen suit in the yellow ‘canary’ wool (Parramatta cloth) of the repeat offender, with a standard issue folding leather convict cap, brown leather shoes and no stockings;

9. another soldier, his hand raised in greeting, wears a blue cap with a black peak, trimmed with a white pop-pom and a gold cap band, with a double-breasted, braided, long-tailed red wool coat and white trousers.

This drawing is a primary source for the history of clothing in Australia. Distinctive in its social inclusiveness, and its tone of amiable satire, it includes rare images of convicts and provides a splendid record of how class and status in a penal colony were instantly recognisable by dress.

Edward Close (1790-1866), soldier, engineer, settler, magistrate and member of the Legislative Council, arrived in New South Wales in 1817. Following colonial service as engineer at Newcastle, NSW, Close resigned his commission and was granted land at Morpeth on the Hunter River. Close would have recieved some training in topographical rendering during his training as a military officer; his coastal and landscape watercolours are the most convincing of his drawings. Lacking academic training, he was naturally less successful with anatomy which explains the naiveté of the figure compositions in this image, but this is more than made up for by his careful observation of the social and clothing codes in operation around him on his arrival in the colony. 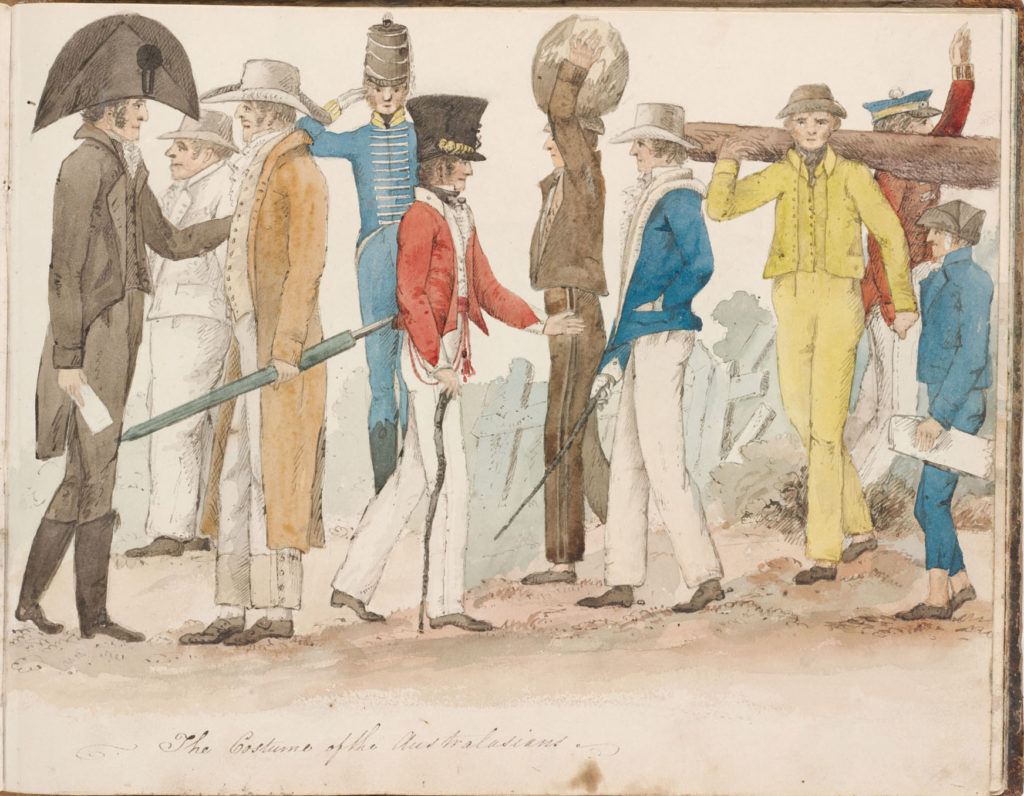 1817 – The Costume of the Australasians