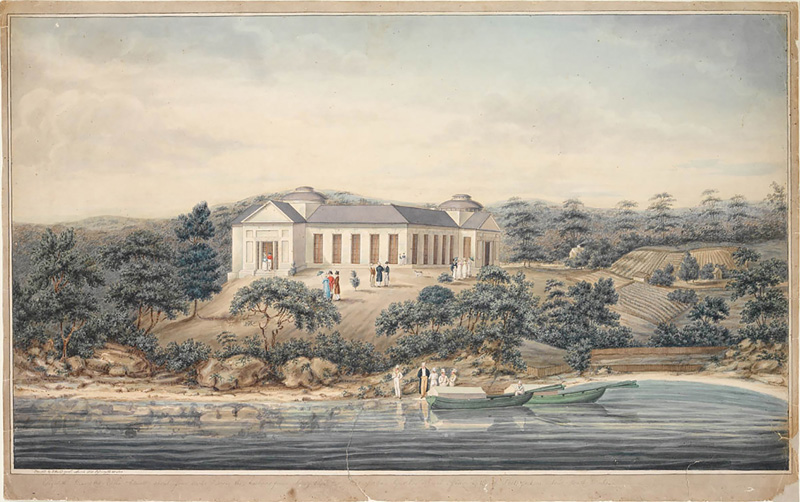 This finely-rendered house portrait of Henrietta Villa, set on the waterfront at Point Piper on the eastern foreshore of Sydney Harbour, includes 18 figures:

– Five boatmen clustered near the water’s edge are wearing white uniforms with short jackets and caps;

– Another man with this group stands with his hands in the pockets of his buff-coloured trousers and wears a light-coloured top hat, and a long dark blue coat over a white shirt;

– Standing higher up, as the grounds slope towards the house, is a group of three guests comprising a woman dressed in a light blue, high-waisted gown, with a cream bonnet and a small blue parasol, and two men – one in the red coat and bicorne hat of a [NSW Corps] officer and the other, a civilian, wearing a long tan-coloured coat with white trousers and a brown top hat;

– Further up, in the centre of the image, another group of men, all three civilians, wear various combinations of tail coats, long frock coats, light-coloured trousers and tall hats;

– Another pair of guests enter the house, the woman wearing a tall-crowned bonnet and a short, blue jacket (or Spencer) over a high-waisted white dress, while the man wears the red jacket of a military uniform.

Henrietta Villa was the property of Captain Piper, and named in honour of Governor Macquarie’s wife. Built between 1816 and 1822, at a cost of £10,000, the house was variously described as a naval villa and a marine pavilion. It was considered the most elegant house in Sydney at the time and became a symbol of progress in the colony. The location of Henrietta Villa was idyllic, a gracious building set on a headland jutting majestically into Sydney Harbour. When this drawing was executed the building was not yet finished – the verandas covering the long windows are absent. Although the estate was not fully occupied until May 1822, Piper entertaining lavishly even before the family took up permanent residence at Point Piper. The house was demolished in the 1850s

Sailing into Sydney Harbour in May 1825, visiting English artist Augustus Earle declared, ‘The first pleasing object which breaks suddenly on the sight after having entered the Port, is Point Piper, so called from a worthy Gentleman of that name, choosing this spot for his residence’. Captain Piper’s Henrietta Villa was a single-storey residence which terminated in two pavilions, each surmounted by a saucer-shaped cupola inset with a series of windows that lit the rooms beneath. One pavilion housed a ballroom, or banqueting hall, designed in the shape of St Andrew’s cross. The gardens were laid out with imported English trees and a row of small brass cannon was positioned in front of the house; these were fired by Piper to salute his friends as they sailed up the harbour to attend his festivities:

‘…no expense has been spared I am told to ornament this fairy palace;… he does the thing properly, for he sends carriages and four, and boats for those who like the water, and returns his guests to their houses in the same manner. He keeps a band of music, and they have quadrilles every evening under the spacious verandahs (sic). At the table there is a vast profusion of every luxury that the 4 quarters of the globe can supply…’

On 2 December 1819, a ‘fete champetre’ was held, which was reported by the Sydney Gazette. Among the guests officers of the 48th Regiment, officers of the French ship L ‘Uranie; and many of the more important members of the colony: ‘About 100 Ladies and Gentlemen sat down to dinner; after which the merry dance’ commenced, which was kept up with great spirit; and on the party leaving Henrietta Villa, they were saluted by a discharge of fifteen guns.’ Piper hosted opulent parties at Henrietta Villa for the leading members of Sydney society, dispensing an unrestrained hospitality unrivalled in Australia for decades afterwards. 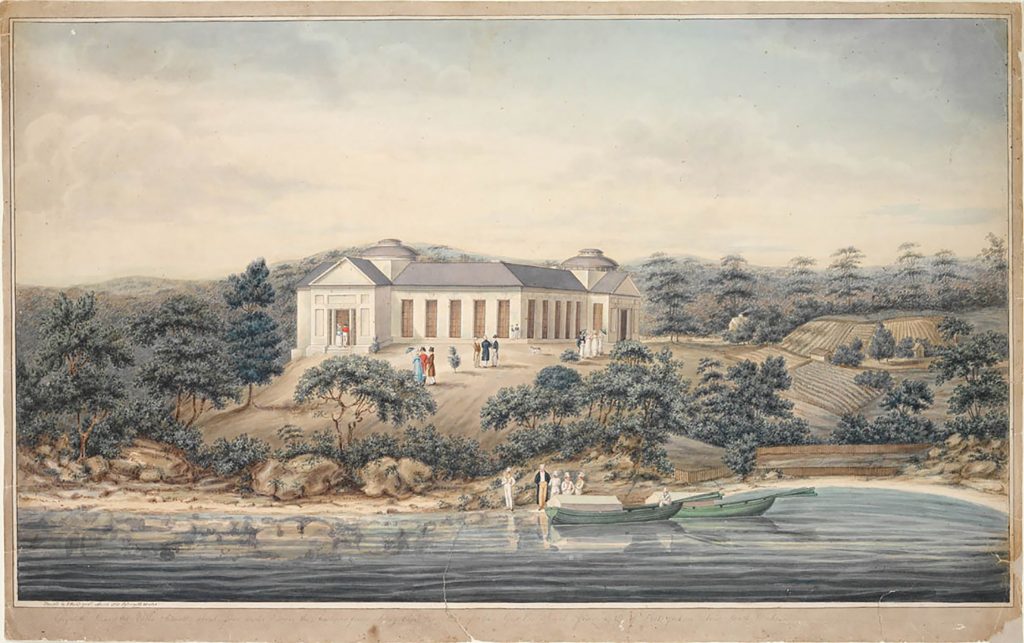