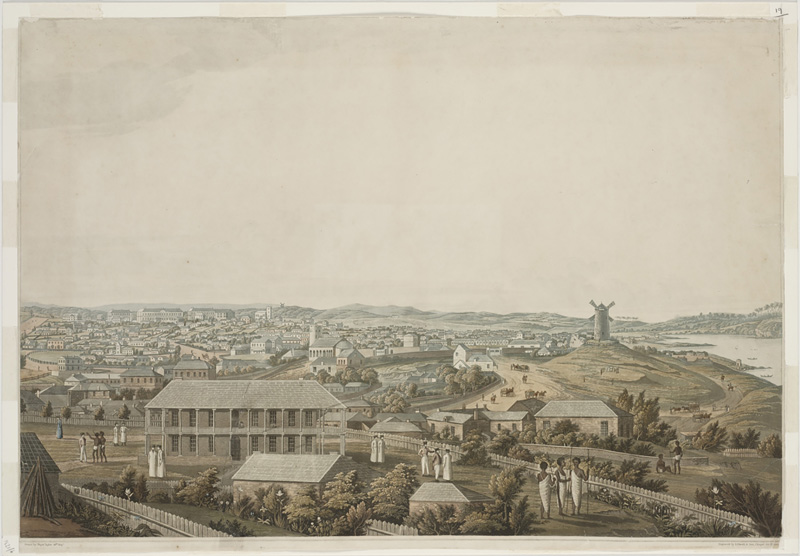 1821 – ‘The entrance of Port Jackson, and part of the town of Sydney, New South Wales.’

This plate is part of triptych (three-part set) of views which, when joined together form a panoramic landscape view taken from the vantage point of Observatory Hill in Sydney. This section of the panorama looks north across ‘the magnificent Harbour of Port Jackson – its rocky and picturesque Shores – its numerous Islands and inlets – the Town of Sydney – the beautiful and Romantic Scenery of the Vicinity…’ (Prospectus for the prints) and includes the small convict cottages of The Rocks (in the middle ground) as well as larger civic establishments like Governor Macquarie’s grand new gothic mansion (on the far left) set in its private domain.

Major Taylor’s panorama offers one of the more informative depictions of the city of Sydney in its early years. It presents a flattering portrait of the Australian colony showing the harbour filled with trade and military ships, with the settlers and convicts clearing and working the land. Topographical artists often included people in their work. Such figures were intended to educate the viewer about the appearance and customs of unfamiliar places. In the foreground of this image two uniformed and shakoed soldiers stand in the yard of a brick dwelling, the lady of the house is near the door wearing a narrow, white, high-waisted day dress with a ruffled neckline and shading herself from the sun with a parasol. A small child and the range of animals including chickens, a puppy and a domesticated kangaroo, lend an air of authenticity to the scene as do the numerous servants going about their assigned work and the convicts industriously employed in cutting sandstone to provide building materials for expansion of the settlement.

Major James Taylor (1785-1829), a topographical draughtsman attached to the 48th Regiment, arrived in Sydney in 1817. By 1820 Sydney was a town of 12,000 inhabitants, about a third of whom were convicts. In that year Taylor made three original watercolours drawings with the stated hope that prints based on his watercolours would be ‘of service to the Colony’ (Taylor to Alexander Berry, 28 Feb 1820). On his return to England in 1822 Taylor arranged for the engraving and printing of a three-sheet panoramic print based on his drawings. 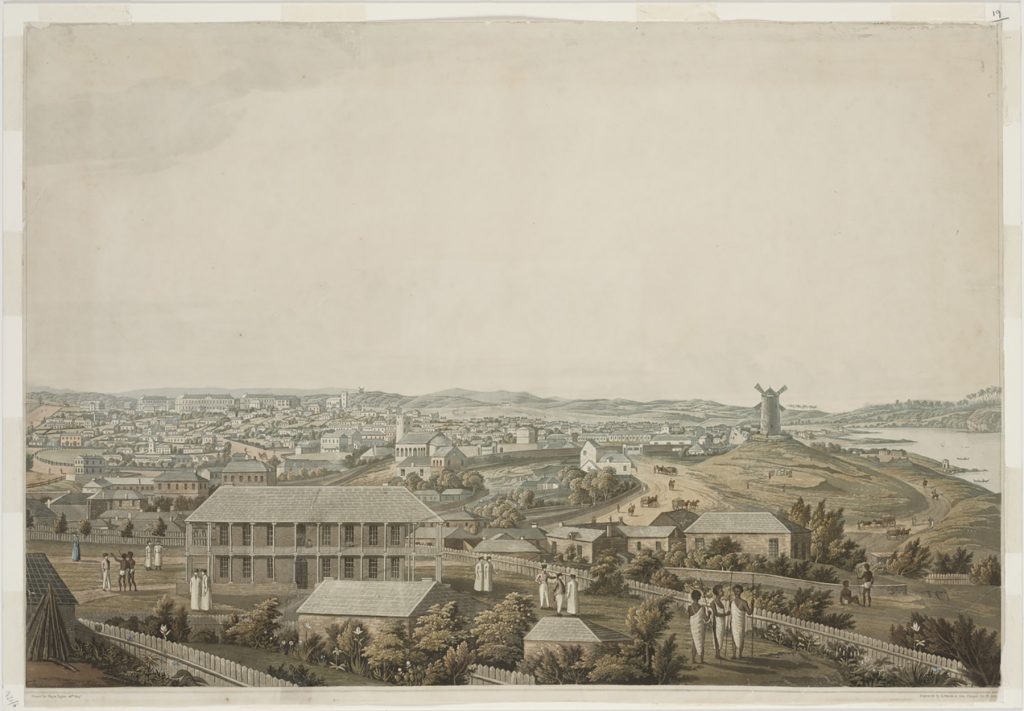 1821 – ‘The entrance of Port Jackson, and part of the town of Sydney, New South Wales.’