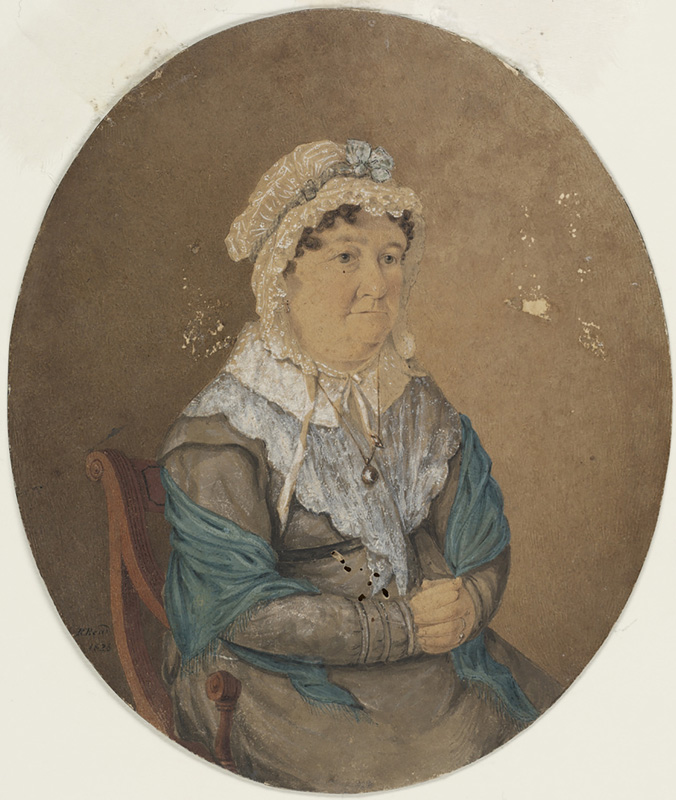 Hannah Laycock (aged about 68) has been posed seated on a cedar carver chair. She wears a high-waisted, fawn-coloured day dress with an ‘epaulette’ shoulder detail extending out above long loose sleeves with three self-fabric bands at the wrist to bring in their fullness. The style of the bodice of her dress is obscured by a sheer [spotted] lace ‘fichu’ or kerchief with a scalloped edge, draped over her shoulders and reaching to a point below her waist, covering a separate linen collar. She has a sky blue, fringed shawl wrapped across her back and around her arms and wears a ‘corvette’ (bonnet-type day cap) of sheer white fabric, tying under the chin and gathered over the crown, trimmed with band of pale blue ribbon and a rosette, the soft double-frilled brim framing her dark brown hair which is arranged in short curls around her face. Mrs Laycock wears small pendant earrings, several rings, and long gold chain from which two ornaments are suspended.

Hannah Laycock, née Pearson (1758-1831) was married to Thomas Laycock (1756?-1809), Quartermaster of the NSW Corps. She arrived in the Gorgon in September 1791, and left again for England in about 1805. She returned to the colony in 1810 after her husband died. The Laycocks had three sons and three daughters, including Thomas Laycock. An early land grant recipient in the Canterbury area, Hannah Laycock settled on her 500-acre grant named ‘King’s Grove’ (after Governor Philip Gidley King), now Kingsgrove, NSW, but is also listed as residing in Pitt Street, Sydney, at the time this portrait was made.

The miniature portrait of Mrs Laycock by Richard Read Jnr (1796-1862) reveals the artists characteristically prosaic approach to portraiture. The majority of his portraits are either half or three-quarter length. Using a sparse, elegant design with cool, matt colours, the sitters are set against a plain background and appear detached, almost solemn. The greatest attention is given to the face which is built up from strokes of watercolour or pencil and, on occasion, he also used white body colour to model costumes and details. Richard Read Jnr rarely signed the face of his portraits but often inscribed them in some detail on the back. Read Jnr operated from 89 Pitt Street between 1826 and 1835, and then from 45 Pitt Street. According to his ad in the Sydney Monitor, in November 1826, R. Read junior’s miniature portraits – ‘painted on Ivory in a superior style’ – could be acquired for prices ‘from One Guinea to Five’. Most of Read’s surviving portraits date from this time onwards.