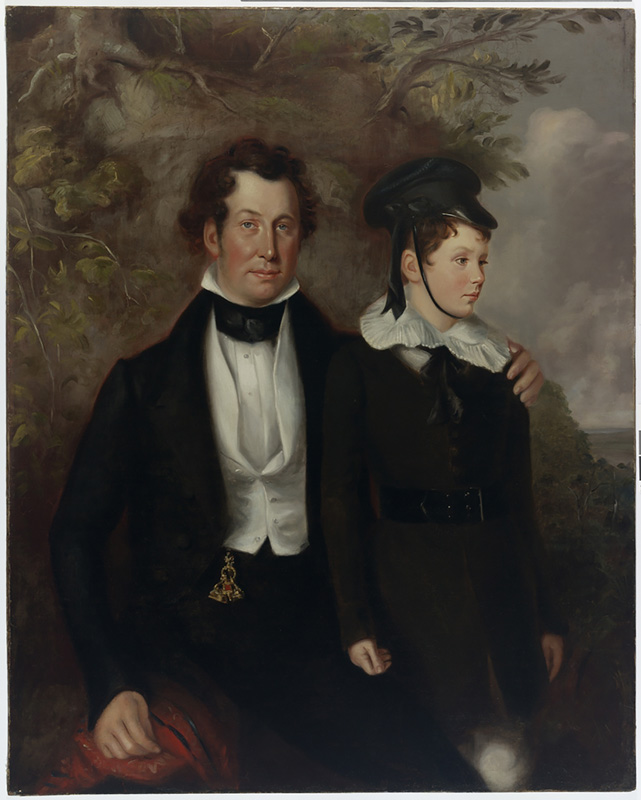 The relationship between the subjects of this unusual colonial double portrait is quite complicated. Sydney draper Thomas Chapman, aged about 44, is shown with his arm around the shoulder of his nephew-by-marriage, Robert Cooper Tertius, aged 10. In 1851, following the death of his first wife Charlotte, nee Cooper, Thomas Chapman married her widowed sister-in-law, Robert’s mother Catherine Rutter Cooper, thus becoming his nephew’s step-father.

Thomas Chapman is posed in a seated position on the left, facing out of the picture, and looking directly at the viewer. In keeping with his occupation as a successful draper, he wears a moderately-styled but well-tailored ensemble consisting of a 2-piece black cloth suit comprising a double-breasted frockcoat with notched lapels, slightly peaked at the shoulders and closely fitted to the arm above slit cuffs, and narrow-fitting matching trousers, over a single-breasted white [silk] waistcoat with a roll collar and a snowy white linen shirt with [pearl] stud buttons and a black neck cloth wrapped around the high, pointed collar. A set of ornamental gold fobs, including several seals and a watch winder, dangles below his waistcoat. Loosely laid over Chapman’s right thigh is a length of patterned and striped textile indicative of his occupation and providing the portrait with its characteristic flash of ‘Felton red’.

Perhaps the most notable change to take place in male appearance during the 1840s was a shift away from the curled hair and side whiskers fashionable in the 1830s to more sleek styles of grooming. Mr Chapman is clean shaven but still wears his hair in natural waves. By this date, the frock coat – varying in length from mid-thigh to just above the knee, skirted all around and cut to fit neatly at waist – had superseded the tailcoat. A double-breasted frockcoat was more usual than the single-breasted style, and remained the correct daytime dress for a draper into the second quarter of the nineteenth century, eventually giving way to the morning coat.

Robert Cooper III stands to his uncle’s left, his head posed in right profile, showing off to best advantage his splendid cap with its peaked patent leather visor, chin strap, black [satin] ribbon bow and streamer trim. He also wears a knee-length, dark [olive brown] wool, single-breasted, shawl-collared frockcoat with a wide black belt at the waist, fastened with a triple-pronged metal buckle, above cream moleskin trousers and a white linen shirt with a broad, flat collar and finely-pleated edge, tied at the neck with a black silk scarf.

This portrait records the fond relationship between Thomas Chapman (ca.1796-1874) and his nephew-by-marriage Robert James Cooper (1830-1910), aka Robert Cooper III (ie. Tertius). It was painted three years before Robert (then aged 13) went to England to finish his education, travelling in the custody his Uncle Thomas.

Maurice Felton’s portraits are characterised by detailed, fine rendering of the face and facial features, capturing the texture of the skin and bringing out the character of the sitter without flattery. His depiction of fabrics emphasises the sheen of the materials, and his portrayal of jewellery is also accomplished

Thomas Chapman was a draper (a retailer of textile fabrics) working in Sydney in the 1840s. He had married Charlotte, nee Cooper (1810-1850), in 1834 but the couple are not known to have had children. In 1851, following the death of Robert Cooper II in Sydney in 1848, Robert’s mother Catherine Cooper (1811- 1860) married her brother-in-law and very close family friend Thomas Chapman (of Brisbane Cottage, Kiama) who subsequently became his nephew’s step-father. The couple lived at Hartwell House, Kiama, built by Thomas Chapman in 1858. Catherine Chapman died of measles at Kiama on 16 July 1860.

Robert Cooper III was born on 26 Sept 1830 at the Cooper family home Juniper Hall in Paddington, Sydney, the first son of Robert Cooper Jnr and his wife Catherine Newell Cooper, nee Rutter. Robert Cooper III received some schooling at Sydney Grammar School. Training as an engineer at Newcastle-on-Tyne, Robert Cooper III became a licensed surveyor. Only 18 years old when his father died, on returning home he went to work for Peter Nicol Russell at the Sydney Foundry and Engineering Works (1842-1855). He later took up land at Burrill Lake which he called Mia Mia.

On 2 Sept 1871, Robert Tertius married Mary Anne Ilett at Milton, the daughter of Ulladulla farmers Thomas and Sarah Ilett. He inherited 100acres and a house at Rocky Point (now Sans Souci) from Thomas Chapman in 1874, and was an Alderman on the Ulladulla Council for many years, holding the position of Mayor in 1896. He on died 20 September 1910.