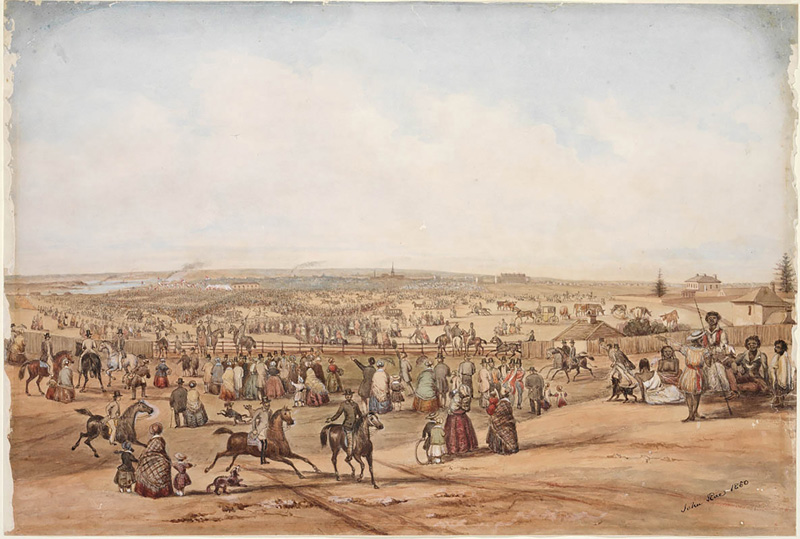 1850 – Turning the first turf of the first railway in the Australasian colonies at Redfern, Sydney, N.S.W.

Taken from the outer periphery of the official proceedings, John Rae’s ambitious history painting of this important contemporary colonial event offers a panoramic north-easterly perspective over the scene, recording wintery blue sky conditions despite heavy rain on the day. Rather than focusing on the ceremony, the artist’s view looks from Redfern, on the western boundary of the Cleveland Paddock (now Prince Alfred Park), across the Sydney skyline with glimpses of Darling Harbour on the far left. Hyde Park Barracks sits solidly on the horizon to the right with the steeple of St James’ Church rising at the centre. In the mid-ground, Cleveland House stands on the far right with cattle grazing nearby, while a yellow and black carriage, horse and driver move towards the centre of the paddock.

The artist has concentrated his attention on documenting the vast crowd of 10, 000 spectators reputed to have been in attendance. Thousands of tiny figures fill the distant view to the water, with the VIP area marked by red, white and blue bunting on the left. A wide cross-section of colonial society cluster in the foreground including:

a group of Indigenous people seated on the ground, the women draped in petticoats or blankets and the men in various combination of cast-offs garments – one standing figure, holding a spear, wears a hat and shirt, or smock, tied at the waist with a red sash.
men roam around on foot in groups and pairs or singly, or on horseback, and are mostly civilians with some red-coated military personnel.
couples and families stand together or apart: the men in tall hats, unmatched jackets and trousers, one (perhaps a hawker) with a heavy basket, several with walking sticks or canes; the women in bonnets and domed-skirted dresses, with shawls wrapped around their shoulders, some carrying infants or baskets or tiny parasols. Hatted and bonneted children hold hands or stand close to adults, one boy carries a hoop, while dogs bark excitedly in the crowd.

This watercolour painting of the Turning of the First sod for the First Railway in 1850 is perhaps his best-known work Public servant, author and painter John Rae (1813-1900). Symbolising the beginning of the age of industrial progress in the colony, thousands of Sydneysiders gathered in Cleveland Paddock, Redfern, on Wednesday 3 July 1850 to watch Mrs Keith Stewart, only daughter of Sir Charles Fitzroy (1796-1858) K.C.B. Governor of NSW (1846-1855), turn the first sod of earth for the construction of Australia’s first railway.

Mary Caroline Stewart, née Fitzroy (1823–95) assumed the role of first Lady of NSW, and chatelaine at government house from arrival in Sydney in August 1849 – following the death in 1847 of her mother Lady Mary FitzRoy (1790–1847) in a carriage accident in the grounds of Government House, Parramatta – until her return to England in 1854.

On the day of the ceremony the governor and his daughter had arrived at Cleveland Paddock at one o’clock. Rain bucketed down as proceedings got underway. Mrs Stewart grasped the tulipwood handle of the handsome ceremonial spade, beautifully engraved with emu and kangaroo and, with ‘a pretty foot pressed down on a dainty spade’, dug into the damp earth, lifting from it the first piece of turf cut for the construction of Australia’s first steam-operated public railway.

ARTIST’S BIO:
John Rae (1813-1900) arrived in Sydney on 8 December 1839 and was appointed Sydney’s first full-time town clerk in 1843, beginning a 50 year public service career; he became secretary to the railway commissioners on 25 July 1857, and was appointed under-secretary for public works and commissioner for railways on 15 January 1861. A talented amateur artist, Rae painted watercolours of Sydney streets and combined his technological and artistic interests by creating large panoramic watercolour sketches, made with the aid of a camera obscura which he constructed to ensure ‘absolute fidelity’ to nature. As early as 1883, Rae’s panoramas were considered to be ‘well worth preserving among the pictures in our Art Gallery, not only for their excellence, but as records of our colonial life and progress’.

BACKGROUND NOTES:
Proposals to build railways in New South Wales had first emerged in 1841. From the outset the primary aim of the colony’s railways was to assist inland primary producers to transport their produce to the port of Sydney for export and to open the country up for closer settlement. The plan was to build the line to Parramatta in the first instance. Charles Cowper MLC, decided that the terminus should be in the ‘government paddock, by Cleveland House’, an area of undeveloped land on the periphery of the city boundary, situated between Devonshire and Cleveland streets, where teamsters who transported goods into and out of the city rested their horses and bullocks.

Until the mid-19th century, the coming of the railway and the subsequent use of the area as the showground for the Agricultural Society, Cleveland Paddocks (later Prince Alfred Park) was an Aboriginal camp site for Sydney’s Indigenous people living west of the city centre. 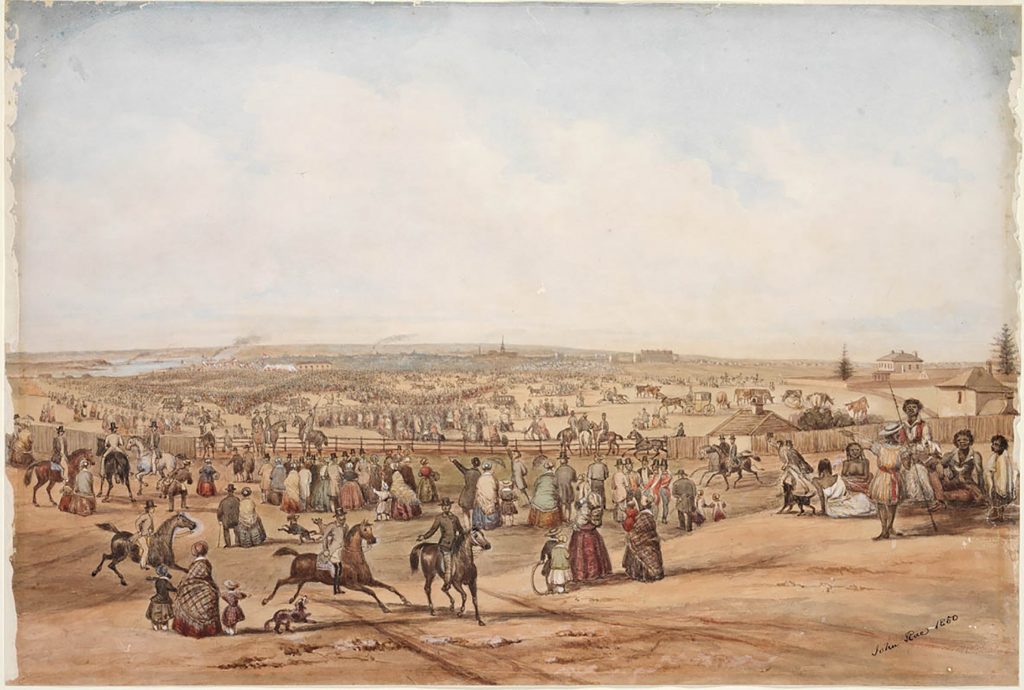 1850 – Turning the first turf of the first railway in the Australasian colonies at Redfern, Sydney, N.S.W.