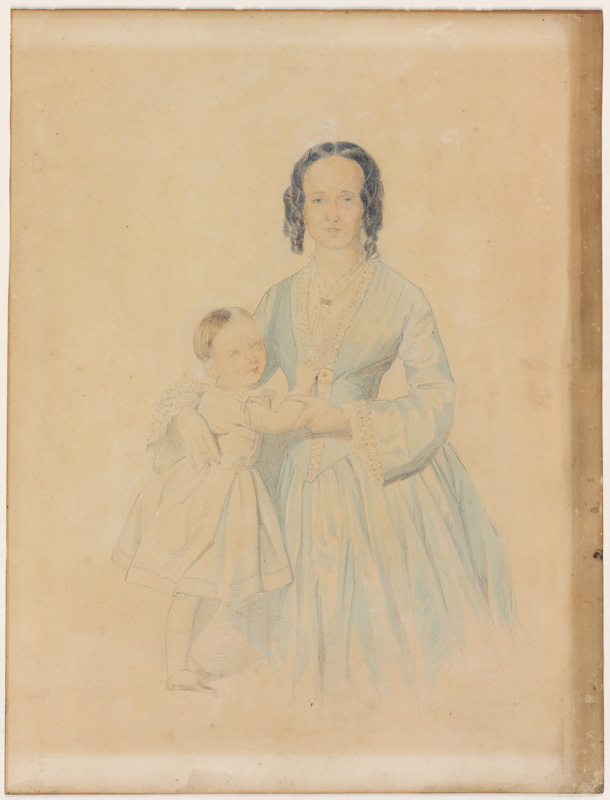 This front facing 3/4 standing portrait shows Martha Hogg, nee Crook, aged 37, with her arms around her infant son, Samuel Nisbet, aged about 3. Given their recent first-hand experience of nineteenth century infant mortality rates, it’s not surprising that the Hogg’s seized this opportunity to have a portrait made of the latest addition to the family; their ‘eldest and only remaining son’ Thomas William Pascoe Hogg (aged 4 and 2 months) had succumbed to malignant cholera in Madras nine years previously, and they would lose a ten months old daughter two years later.

Mrs Hogg wears a [2-piece] day dress in a plain pale blue fabric and comprising a matching jacket style ‘basque’ bodice with a pointed waist and full, gathered skirt held out with numerous petticoats. The form-fitting bodice has wide, pagoda sleeves and a deep v-neckline opening worn over a sheer white chemisette, or undershirt and fastened with a small brooch to, the edges of the centre front opening and sleeve cuffs trimmed with white [ribbon] ruching. She wears her dark hair with a centre parting, arranged in loosely curled ringlets hanging over her ears

Samuel wears a knee length dress, customary attire at this time for all children during their toilet training years regardless of sex. His short-sleeved frock is made of a light-coloured cloth with self-fabric trims on the bodice and cuff, the full skirt has a wide hem or tuck at the knee, perhaps to allow it to be let down. He wears flat, square toed, black patent shoes with ankle strap fastenings, and his short, fair hair is combed in to a side-parting – a useful indicator of his gender in an era when all girls wore a centre parting.

Martha Hogg (1815-1890) was Miss Martha Crook, a daughter of Revd William Pascoe Crook, chaplain to the colony during the Rum Rebellion. Born in Jamieson Street, Sydney, Martha married Thomas Alexander Hogg, a Surgeon in the East India Company’s (EIC) service, in December 1837. The couple moved to India where at least two sons were born, including Samuel Nisbet Hogg (1849-1934).

Retiring from the EIC, Thomas Hogg brought his family back to Sydney in about 1850, where he continued to practise his profession as a medical-man in and about Sydney for many years. He died in his 86th year at Darlington Newtown Road Sydney. Samuel Hogg entered the service of the Bank of New South Wales, where he remained until his retirement. Honorary treasurer of the Balmain Hospital and the Balmain Benevolent Society, he was also a local historian and published author. He died at Wahroonga aged 85.

William Nicholas (1807-1854) was known for his delicately rendered watercolour portraits and seems to have been the favoured portrait artist of prominent colonial families in Sydney like the Macarthurs, the Wentworths and the Kings. 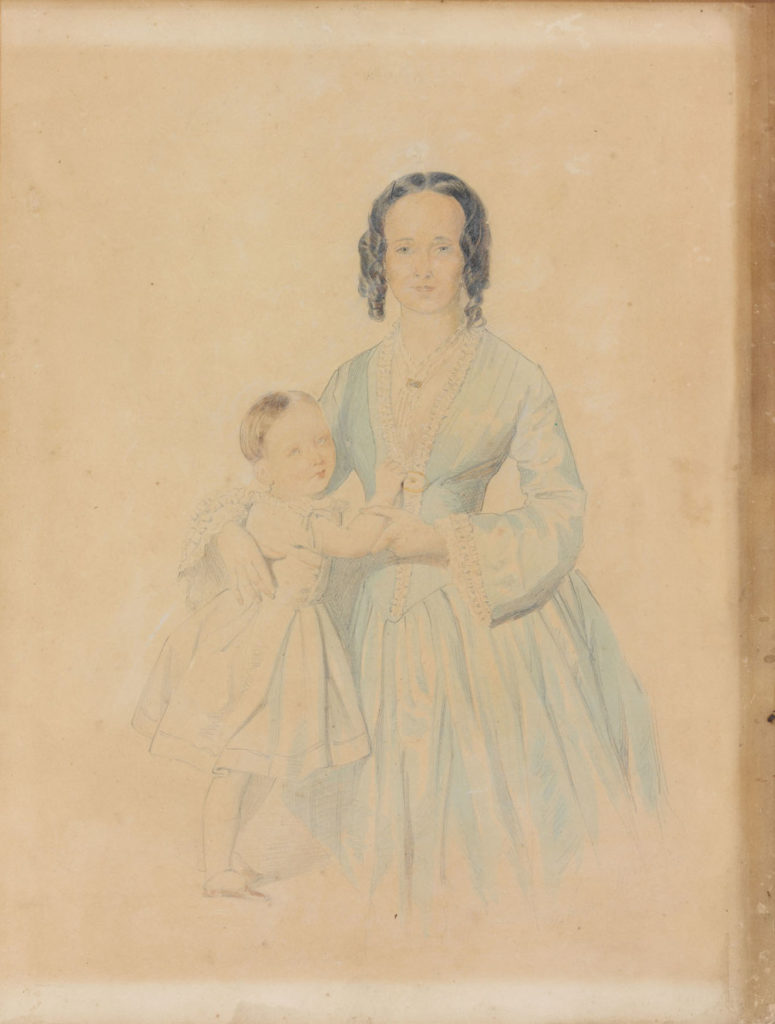