This large genre painting records the Anniversary Day Regatta on Sydney Harbour in about 1852, and also depicts the picturesque rock formation jutting into the sky known as Mrs Macquarie’s Chair, with its rough-hewn seat, located at the extreme end of the Domain to the east of Farm Cove. The first Anniversary Day (or Foundation Day as it was originally known) Regatta was held on 26 January 1837, to mark the 49th anniversary of the landing of the First Fleet, and continues to this day. Before long the Anniversary holiday was being observed by government departments and private employers, freeing ‘persons of all classes’ to join the harbourside throng.

A familiar spot to almost everyone who has ever visited Sydney, Mrs Macquarie’s Chair has always been a popular vantage point for crowds drawn from all levels of society, and this much-loved image captures the colourful scene. Boats and steamers ran between Garden Island, Battery Point, and Farm Cove throughout the day with masses of well-dressed, eager spectators gathered in the foreground set against a backdrop of the harbour covered by a fleet of boats of all sizes.

Men, women and children, some even with their pets, are seen enjoying a day picnicking and cavorting in groups on the foreshore, clustering around refreshments and entertainment tents where victuallers dispense food and drink from allocated booths – including that of the Royal Oak Hotel [perhaps the Royal Oak Family Hotel 305 Pitt Street] – while pie-men hawk their wares among the crowds, and fraudsters spruik their dubious games of chance to the unsuspecting.

This painting is of further significance for flags experts (vexillologists) as it shows the NSW Ensign (the unofficial flag for Australia from the mid-19th Century) being flown on land, rather than from a vessel.

The artist of this important 1850s painting of Australians enjoying their national holiday is not known. The success of this image is, however, largely due to the artist’s having paid attention to ‘…the proper drawing, disposition and grouping of figures…[being of] more consequence in communication of life and verisimilitude to a sketch of natural scenery than some landscape painters are willing to allow…’ (SMH, 15/2/ 1850, p.2.)

The basis for the 1855 date on the original mount of this painting is also not known. Costume features such as tiered skirts suggest a date of c. 1852-1860. A separately issued lithograph based on this painting was produced in about 1870, by Sydney artist and surveyor John Black Henderson (1827-1918), and captioned ‘Picnic held at Lady Macquarie’s Chair Sydney N S Wales in 1852’.

This painting was further reproduced in the Sydney Mail (30/1/1897 ) – at which time the original oil was still in the hands of John C Lovell, ‘furniture, warehousemen and fine art dealers’ George Street, Sydney, before it was purchased by Sir William Dixson – and later republished in the Anchor (5/10/1911) possibly based on the 1870s lithograph with the caption: ‘Anniversary Regatta 1850 – View by Mrs. Macquarie’s Chair (from an old Engraving)’. https://www.daao.org.au/bio/alfred-clint/biography/ 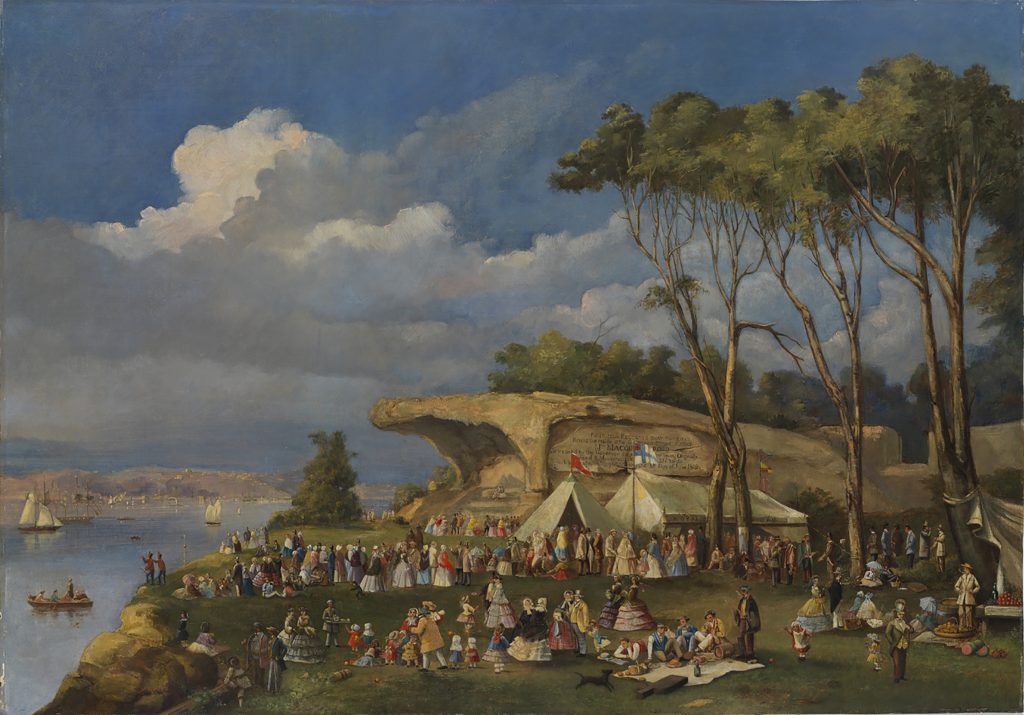