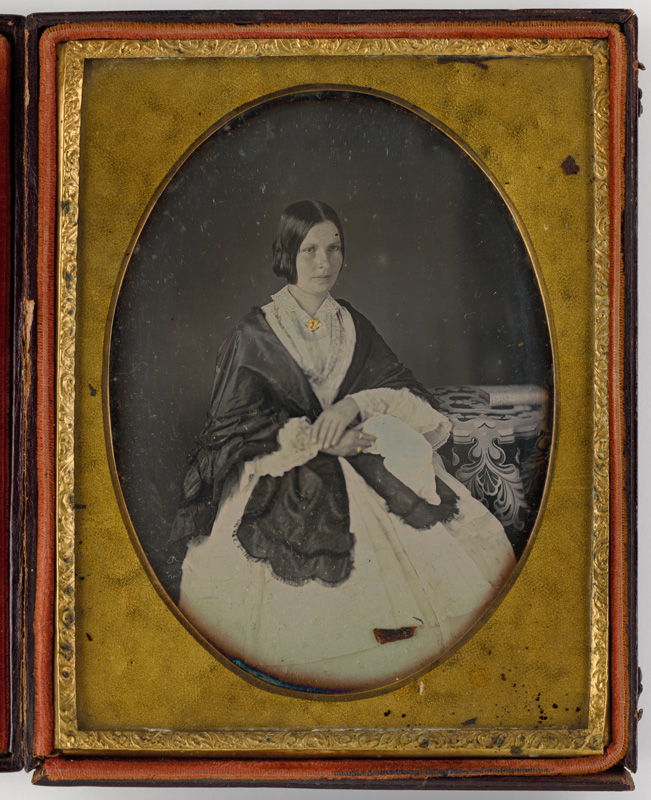 This right facing ¾ length seated portrait shows Maria Bligh, aged 29, her right arm resting on a small round ‘posing table’ covered with the brightly-patterned plush cloth that identifies it as a prop of the American and Australian Daguerreotype Gallery, Thomas Skelton Glaister’s (1825-1904) studio of located at 100 Pitt Street, Sydney, from April 1855. Glaister was trained as a professional photographer in New York and concentrated his studio portraiture on Sydney society’s elite. Although Glaister’s photographs were expensive, he offered hand-colouring for no extra charge and quickly garnered a reputation for high photographic standards, producing portraits which were guaranteed never to fade.

Mrs Bligh wears a light-coloured [silk] day dress seemingly well-suited to a Sydney summer, though perhaps not best suited for a daguerreotype portrait which, according to Glaister’s advice, recommended:

Dark dresses of any material…are preferable for Ladies and Children…figured dresses, with strong contrasts take well; dresses with much lustre take brighter than those with none…Bonnets seldom should be worn, as they shade the face…A figured shawl or mantilla gives a pleasing effect to the picture…

Maria’s dress has a plain, wide-spreading pleated skirt with the bodice, or corsage, left open to the waist, its front edges probably fastening with hooks or buttons but folded back to form revers and worn over a chemisette of white eyelet-worked [cotton] with a pointed, turn-down collar fastened with a gold brooch. The ¾ -length ‘pagoda’ sleeves are open and full, with ruched self-fabric trimming the cuffs, worn with a pair of white [cotton] undersleeves fitted over the forearms and closed at the wrist.

She wears a dark-coloured shawl of light-weight silk draped around her shoulders, folded in half to create a doubled triangle with two rows of scalloping trimmed with fine lace, the lower edge forming a border, and held demurely in place by her crossed arms. Daguerreotypes, being positive mirror images, are laterally reversed – which means wedding rings customarily worn on the left hand (as seen in this image) will appear to the viewer to be worn on the sitter’s right hand.

Her dark hair is centre-parted with side loops, brushed smoothly over each ear and spreading onto her cheeks (perhaps a side effect of wearing a close-fitting bonnet), the remainder coiled/braided into a soft bun pinned at the back of the neck.

In February 1847, at Scone, NSW, Maria Isabella Fennell (1826-1867) married Richard John Bligh (1819-1869), eldest son of Richard and Elizabeth Bligh and a grandson of Gov. William Bligh. The couple had 8 children: their first born in Nov 1847 at Warialda, NSW, where Bligh worked as a Commissioner for Colonial Lands (C.C.L.) and magistrate (1847-1856) attempting to bring justice to bear on white settlers who killed Aboriginal people. Bligh had arrived at the new settlement in the Gwydir squatting district in 1845, erecting a camp on the banks of the Reedy River. At least one other daughter Edith (March 1853), and a son Neville (March 1855-1891) were also born at Warialda.

In about 1856, Bligh moved with his family to the Twofold Bay area, where he worked as a doctor and Medical Attendant to the Twofold Bay Benevolent Asylum; a lengthy testimonial in Nov 1859 (SMH) noted the much lamented departure for Sydney of Dr Bligh and his family after five years in the district. He is later listed in Sydney [SMH, 1862] as ‘Richard Bligh Esq. Surgeon, Paddington’. On 5 June 1867, Maria Bligh died, aged 40, at her home at 163 Kent Street Sydney. Richard Bligh of ‘Riverstone, Clarence River’ died two years later.

On Tuesday 4 Dec 1855, Thomas Glaister advertised his ‘American and Australian Daguerreotype Gallery’ on the front page of Sydney’s The Empire newspaper describing his:

splendid Photographic Rooms, with one of the best arranged and largest skylights in the colonies, at 100, Pitt-street, next door to the Royal Victoria Theatre, where he is now producing likenesses which are pronounced by good judges to be vastly superior in delineation, boldness, and the most lifelike to any ever before taken in this colony…Mr. G. has one of Haydon and Co.’s quick working cameras (the quickest now made), the only instrument of the kind in this country, by which pictures are taken in one fourth of the time required by other cameras…

On 5 January 1856, The People’s Advocate reported:

Having recently paid a visit to Mr. Glaister’s American and Australian Portrait Gallery, next door to the Victoria Theatre, we must pronounce it as the most complete and best arranged studio for taking likenesses in the photographic style, we have yet seen in Sydney…

DAGUERREOTYPES:
The process of making a hand-coloured daguerreotype starts with a silver-plated copper plate. Once the plate has been sensitised and exposed, the image is developed, fixed and washed. The surface of the daguerreotype to be hand-coloured is coated with a thin film of gum arabic and left to dry. The colourist then breathed on the treated plate to make it sticky and applied dry powdered pigment with a fine paintbrush onto the image surface. The finished daguerreotype portrait was then covered by a sheet of protective glass, sealed to prevent tarnishing and marking of the delicate surface, and mounted either in the customer’s choice of decorative frame or leather-bound case lined with dark velvet, plush or satin which served the dual purpose of providing a matt surface to reflect back onto the mirror-like plate to aid viewing and to protecting the glass cover. 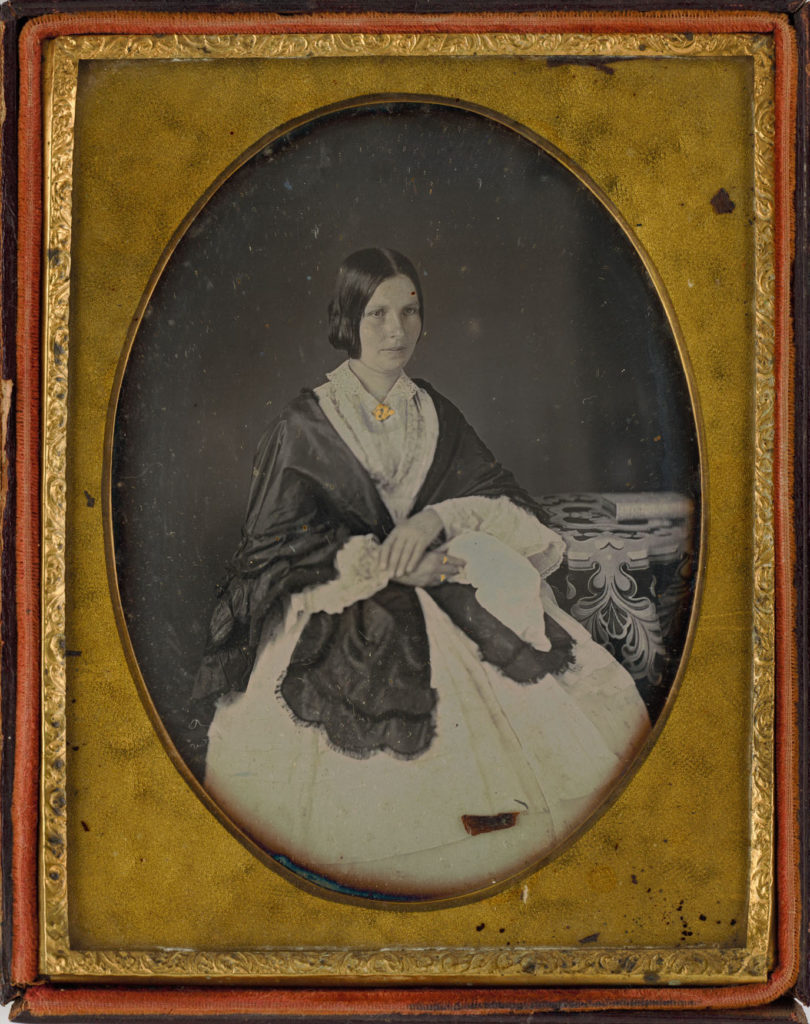