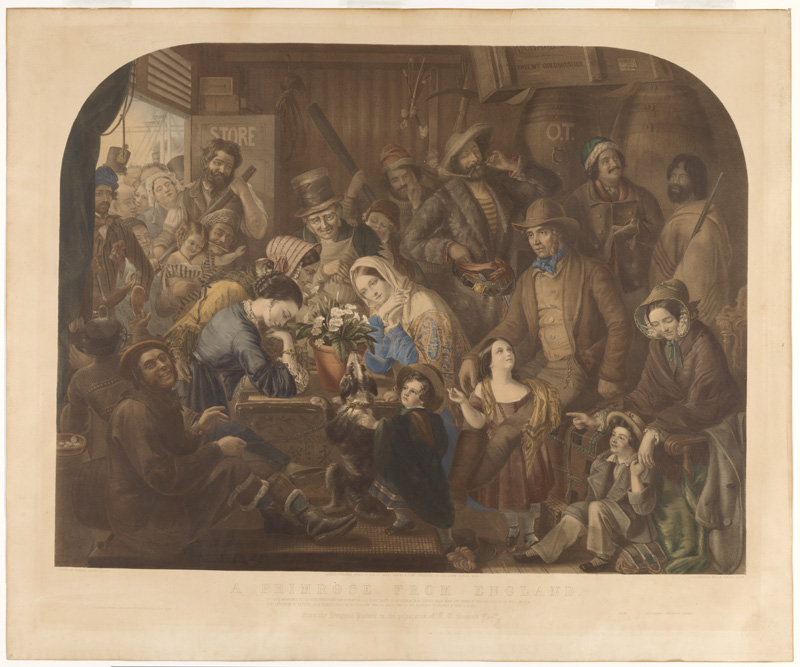 This coloured lithograph of ‘A Primrose from England’ was created in 1856, engraved from the original oil painting first exhibited at the Royal Academy in London in 1855. The central feature in this painting is a larger-than-life primrose in full flower. The artist Edward Hopley was inspired to create his painting by reports of an actual event: he transportation of a primrose from England to Melbourne made possible – to the profound excitement of the colonial populace – by the invention of the Wardian Case in 1933. The image was so popular when it was exhibited that it was quickly made into a lithograph print for the mass market.

Though the original painting was created in England, the artist has been careful to craft an image that offers a richly layered narrative on the dual theme of immigration and colonization, using his subject as a vehicle for exploring the emotions associated with the nineteenth century emigrant experience. He portays a diverse and multi-racial, cross-section of migrants, each stereotypical of his or her class or station in life, gathered round the Primrose, with individuals from different social strata intermingled in a potentially chaotic space, while others crowd the doorway anxious to gain access to the colony’s latest European import.

Standing on deck (the smoke stack of the steamship just visible in the top left hand corner) from the far left:

a flashily-dressed continental gentleman [possibly French – suggested by the blue ribbon cockade on his hat] pays his silver coin entry fee;
a sailor [indicated by his black-tarred boater style hat] collects the coin sitting at the entry way barred with a double-barrelled shotgun held by a tall, bearded man in shirt sleeves and waistcoat, standing against the door marked ‘STORE’;
a cluster of people fill the doorway with a bespectacled older man, a younger man, a servant class woman and a Chinese man (his plaited ‘queue’ wrapped around his head) and the headgear of others visible including a soldier’s shako, the rim of a woman’s straw bonnet and a man’s top hat.
Inside the store room, near the door and standing along the back wall, from left to right are:

a Scotsman [denoted by his ‘scots’ bonnet or tam-o-shanter] holding up a little girl with gold ringlets wearing a [coral] necklace and cream dress cut low across the shoulder line and trimmed with a band of striped ribbon;
an elderly man wearing an apron [probably a shopkeeper] with a battered top hat and spectacles;
two sea-faring types in knitted caps and sweaters;
a tall, dark-bearded [adventurer/prospector] twirling his moustache, wearing a light straw hat and a striped jersey under a coarse wool coat sashed at the waist [over a pair of pistols], a black leather gilt-buckled belt slung around his hips;
an Indian man with a moustache wearing a striped turban and double-breasted wool coat, left unbuttoned to reveal his western style clothing;
an Indigenous man wearing a blanket-like garment and carrying a tall staff.
In the foreground, from the right to left:

an emigrant family of five comprising a mother seated on an ornately carved chair wearing a floral-trimmed bonnet and shawl over a green dress;
her older son seated on a striped carpet bag at her feet, wearing a straw boater style hat with a ribbon band and a warm, woollen coat over a cotton shirt, cuffed trousers, striped socks and black patent leather ankle-strapped shoes;
the father seated on an expensive looking brass-studded steamer truck and clad in the practical [earth-coloured moleskin] clothing of a farmer including a round-crowned [leather] hat and a shawl-collared coat and trousers, his watch fobs dangling below a double-breasted, collared waistcoat, with a blue scarf tied in a bow at the neck;
his legs are wrapped around the torso of his young daughter who wears a red dress cut low across the shoulder line, with a yellow and blue striped scarf draped around her neck, above white socks and black ankle-strapped shoes;
another, smaller boy in a boater style hat is yet to be breeched, and wears a dress under his velvet cape with a hood, above striped socks and ankle-strapped patent leather shoes;
an [agricultural] labourer [perhaps a shepherd] wearing a reddish brown felt cap and travelling with his a black and white collie dog tethered to a plaited leash.
In the centre of the scene, gathered around the flowering plant in its terracotta pot, on a steamer trunk functioning as an altar, are the three women including:

a golden-haired ‘Madonna-like’ girl wearing a blue dress kneels, her hands clasped in adoration, her head and shoulders draped in a cream shawl with a deep paisley border;
and two women opposite – [a mother and daughter or sisters] the elder, leaning over to admire the bloom, wears a pale pink bonnet of shirred silk, its inside edges trimmed with white flowers, above her ensemble of matching yellow silk gown and jacket/cape with ‘pagoda’ sleeves, trimmed with fine black lace, her arm around the waist of her younger companion who is bare-headed, revealing her stylishly-arranged dark hair and long gold pendant earrings, above an elegant day dress of [shot] purple [silk] with wide ‘pagoda’ sleeves and white, ruffle-edged undersleeves, open at the wrist to reveal slender forearms and an ornate gold bangle set with red stones.

English artist Edward Hopley (1816-1869) knew a winning story when he read about the Melbourne primrose; his painting (now in the collection of the Bendigo Art Gallery) was displayed at 1855 Royal Academy Exhibition with an explanatory text:

‘Dr Ward mentioned to the Royal Institution, that a primrose had been taken to Australia in a covered glass case and when it arrived there, in full bloom, the sensation it excited as a reminiscence of ‘fatherland’ was so great, that it was necessary to protect it by a guard’. (GLEANINGS, Mount Alexander Mail, 9/9/1854, p.7.)
The ‘Wardian Case’ had revolutionised the transportation of plant specimens throughout the British Empire; the glass case enabled plants, such as the primrose, to survive the long sea journey to Australia with a minimum of watering. The arrival in the Australian colonies from England of a primrose in perfect health gave British migrants a belief in the future of their adopted country; if the fragile the primrose could flourish in the new land, so too could other English life forms such as the women, at the centre of the image, who are themselves symbols of European civilisation, domesticity and fertility. 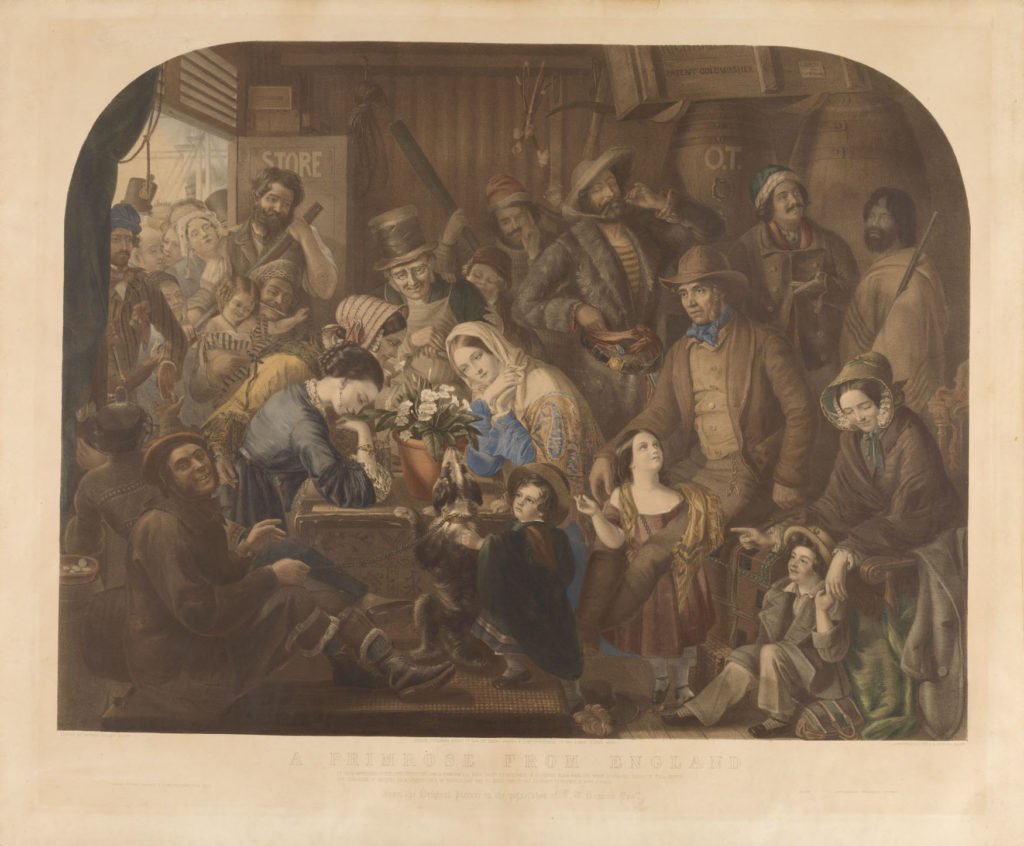