This image shows the large groups of spectators attending the first inter-colonial cricket match between New South Wales and Victoria, which was played on Wednesday 26 March 1856; the crowd displays little interest in the game as a fieldsman desperately chases the ball to the boundary.

The people in this image are dressed in an array of clothing typical of the era. The male spectators all wear tall hats and suits or unmatched sets of long line ‘sac’ jackets and trousers, with or without waistcoats, over white shirts and dark neckties. The small boy standing in the centre of the image, watching the game with his back to the artist, wears a blouse and knicker suit and a tasselled cap.

The women and girls wear an assortment of jackets or capes and bonnets – one also carries a tiny, fringed [collapsible carriage] parasol to shade her face from the sun – and light-coloured dresses with dome-shaped skirts held out by numerous stiffened petticoats. From 1852, there was a fashion for flounces arranged in horizontal tiers to enhance the fullness of the skirt circumference, which could reach up to four or five yards (4.5m). There was also a marked preference for lightweight fabrics made ‘a disposition’, ie. dress lengths woven or printed with a narrower version of the motifs and borders of the overall textile design for use on flounces, sleeves and bodice trimmings.

The fashionably dressed group in the left foreground have been identified as Commissary-General Coxsworthy and family. Ferguson Thomas Coxsworthy (1799?-1874), ‘long resident in Canada’, was appointed Officer in Charge of the NSW Commissariat under Governor Fitzroy, arriving in Sydney with his wife Julia, nee Godard (1806 -?) and five daughters, on 16 November 1852. By 1856, Coxsworthy had been promoted to Commissary General and relocated to Melbourne. The tall young man walking between the two smaller girls maybe James Coxsworthy, the couple’s second eldest son, who died at sea, off the coast of Tenerife, in 1857.

With tickets priced at 1 shilling, and ladies free of charge, 5000 people are known to have gathered in Richmond Park, at the outer eastern end of the current Melbourne Cricket Ground (MCG), to watch the first day of play between New South Wales and Victoria which saw the NSW team ultimately victorious.

The MCG Committee had made great preparations to ensure the comfort of the crowd. In addition to the clubhouse with veranda which had been built in 1854 (seen on the left in this image), newspapers reported that ’the ladies will find marquees [out of view in this image on the right of the wickets], a band and the establishment of Woolcott and Mansfield, the confectioners, besides seats to enable them to view the play without fatigue…’ (The Age, 26/3/1856, p.3). The band is shown playing under the shade of a large tree, in centre of the image, and was provided by the 40th regiment which was stationed in Victoria at the time

The artist, John Black Henderson (1827-1918) was a late colonial-era painter, sketcher, comic illustrator, amateur photographer and surveyor, who migrated to Victoria in 1851, where he worked on the Ballarat goldfields for several months before joining the Victorian Government Survey Office in Melbourne. Henderson is best known for his retrospective watercolour of the Eureka Stockade Riot at Ballarat, 3 December 1854 (DG SSV2B/Ball/7) – ‘painted from sketches done on the spot a few hours after the event, the dress of the miners and the uniforms of the soldiers being accurate’. 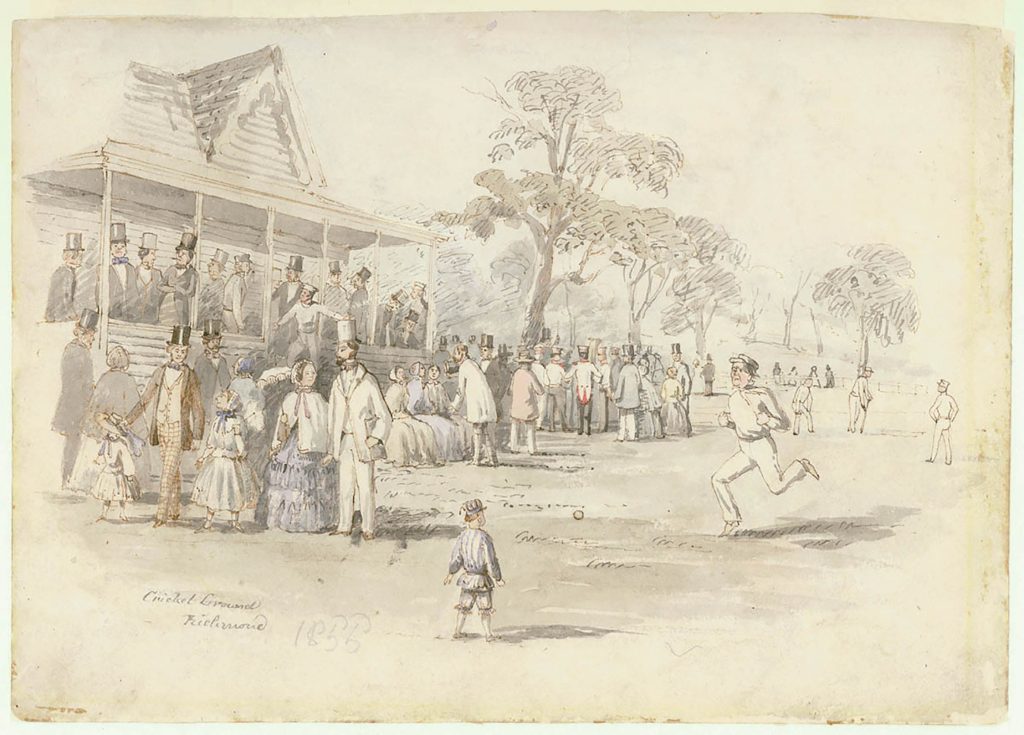