1857 – James Johnson, survivor of the wreck of the Dunbar

This right facing ½ length photographic portrait shows Irish Able-seaman James Johnson, aged 25, posed in front of a plain studio backdrop. The sole survivor of the clipper Dunbar which ran aground outside Sydney Harbour, below South Head, on the night of 20 August 1857, Johnson was rescued from the cliff face two days later and became a known personality in the colony. This large format hand-coloured ambrotype would have been much too costly for the sitter to commission. Its unusual close-focus suggests it was probably taken for promotional purposes by entrepreneurial photographer Thomas Glaister, to entice Sydney citizens curious about the tragedy to the display of famous faces at his Pitt Street Excelsior Photographic Galleries. Johnson wind-burned cheeks and chapped lips provide stark evidence of his ordeal. He is simply clothed in a thick, woollen single-breasted pilot’s coat with a built-in shoulder cape and narrow turn-back collar, over a white shirt and scarf neck tie, presumably all brand new and supplied ‘ready-to wear’ by a Sydney outfitter. His thick, dark wavy hair has a right parting and his whiskers are trimmed into a full fringe beard. Before 1860 only wealthy people could afford to commission portraits which makes this an exceptionally rare photographic record of the appearance of a mid-nineteenth century working class man.

The tale of the wreck of the Dunbar is part of Sydney’s history. It led to both massive outpourings of public grief and developments in maritime safety. At least two other Sydney photographers were eager to cash in on the short-lived celebrity of James Johnson (1837-1915 ) the sole of the Dunbar shipwreck; J.W. Denslow photographed Johnson in a casually seated pose while Freeman Bros. advertised a ‘collodiotype on paper’ (SMH, 29/8/1857, p. 8). For many years after his ordeal, Johnson was the lighthouse keeper at Newcastle and, while in that position, succeeded in saving the lives of others. He died at his home in Dulwich Hill at the age of 78. SHIPWRECK: The Dunbar was named after its wealthy owner Duncan Dunbar, and said to be the largest vessel ever built at the Sunderland shipyard in north-eastern England. Completed in 1854, when the Australian gold rushes created a demand for passenger ships, it was used as a troop ship for the Crimean War prior to its first voyage to Sydney in 1856. On the night of Thursday 20 August 1857, after 81 days at sea, the Dunbar arrived off Sydney Heads just before midnight, to treacherous weather conditions with heavy rain squalls impairing vision and obscuring the cliffs at the entrance to Port Jackson. Captained by James Green, a veteran of eight previous visits to Sydney, in conditions of such poor visibility the Dunbar collided with a cliff near South Head, several hundred metres north of the Macquarie lighthouse. The impact brought down the topmasts, mounting seas stoved in the lifeboats and the Dunbar was heaved broadside to the swells. Lying on its side, the ship began to break up almost immediately. One crewman, James Johnson, found himself hurled onto the cliffs where he managed to gain a finger hold. Scrambling higher, he became the sole survivor amidst a sea of bodies comprising the remaining 58 crew, and all 63 passengers many of whom were established residents of Sydney. Dawn gradually unveiled the enormity of the tragedy to the community of Sydney. Thousands were drawn to the scene and the morbid task of identifying relatives, friends and business associates soon began. James Johnson clung to his precarious hold on the rock ledge until the morning of 22 August, two days after the ship wreck, when he was noticed from the cliff top with the shout: ‘A Man on the rocks! A live man on the Rocks! There he is! there he is!’ Johnson was rescued ‘with not as much as a scratch about him and otherwise quite well’. He later explained that his greatest fear was that [as there were a great many bodies near him…] he would not be seen/found and he would be starved. (SMH, 24, 25/8/ 1857) INQUEST TESTIMONY: ‘Coming into Sydney under topsail a few minutes before twelve o’clock on Thursday night Captain Green must have taken the bluff at the north end of the Gap for North Head and in ordering the helm to starboard when the ship struck the rock and almost immediately broke up. About thirty years of age and a strong and powerfully built Irishman, Johnson with the old boatswain and two Dutch seamen were about the last who were washed from the wreck, they four holding on a piece of plank from which the two Dutchmen were soon washed, a huge sea then threw Johnson and the boatswain on shore amongst some pieces of timber from which Johnson scrambled to a higher shelving rock to avoid the next sea, which he did but the old boatswain, less active, was carried away and perished. Johnson then climbed to a higher still position and being much exhausted laid down and slept. The next day he saw a steamer go into the heads, he signalled but was not seen. Friday night passed in this state. On Saturday morning he endeavoured to get along the rocks he could see people on the cliffs above but could not make himself seen until a brave lad (Antonio Wollier, an Icelander) who had gone down Jacob’s Ladder and along the rocks, noticed Johnson waiving a handkerchief relief came and he was son after hauled up to the cliffs which were about 2000 feet high.’ 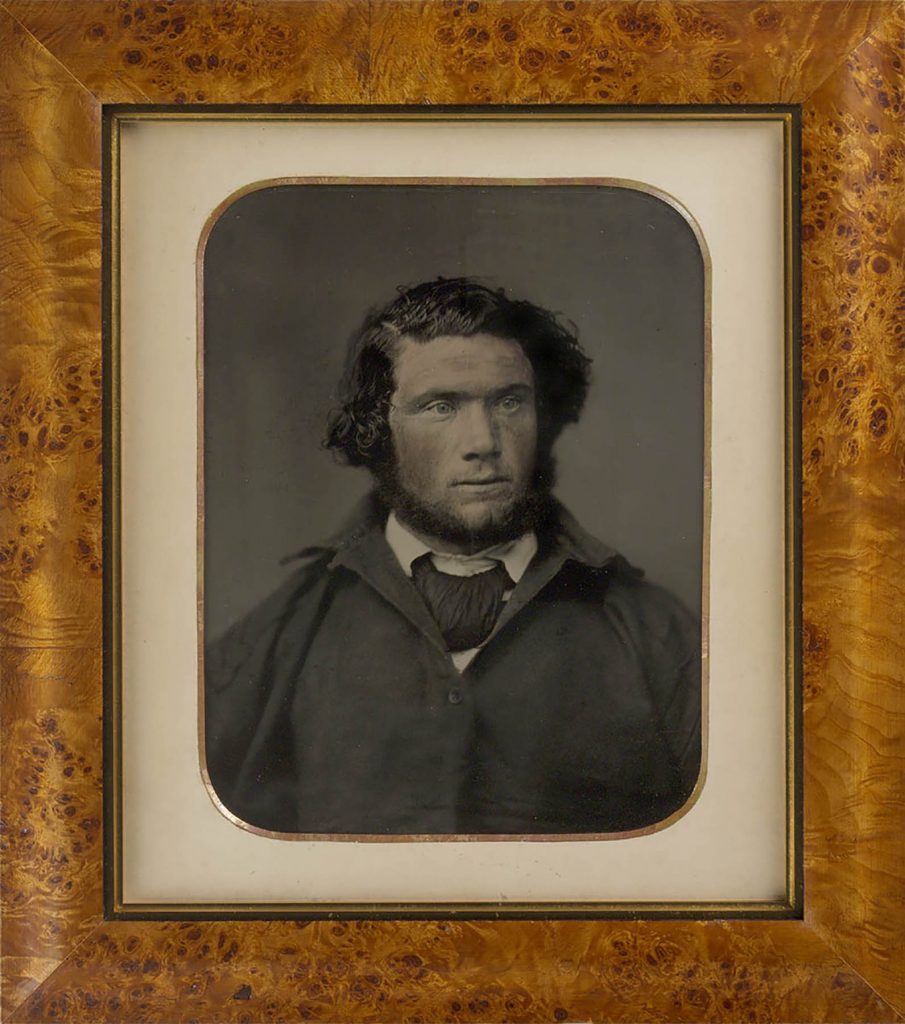 1857 – James Johnson, survivor of the wreck of the Dunbar