This front-facing, ¾ length oil portrait shows Jane Allen, aged 53, seated in an easy chair, richly upholstered and buttoned in a colourful silk [brocade] fabric, and set against a masonry wall with a view on the right, behind her, suggestive of a domestic garden. In 1861, a Sydney Morning Herald review had reported that the portrait artist, James Anderson, ‘had portrayed on canvass many of our citizens, and always with the greatest success—his works being as much esteemed for their artistic finish as for their correct likeness’.

For this portrait, Mrs Allen has chosen a striking [silk] afternoon gown, providing clear evidence (contrary to the opinions expressed in many nineteenth century sources) that some older woman did continue to wear fashionable attire, even after 35 years of marriage. As befitting a woman of her elite financial and social position in the colony, Mrs Allen would have had access to expensive materials and a very good dressmaker; this dress through its ‘bespoke’ manufacture certainly represents a generous outlay of time, money and skill.

Boldly-striped silks like this were extremely popular at this date. With its pattern of broad and narrow stripes and strongly contrasting colour combinations, the imported fabric was probably woven rather than printed and, in this instance, possibly from France rather than from China. Cut in the latest shape – a new shorter type of corset without a centre ‘busk’ was introduced in 1853 – this lessened the restrictive fit and length of earlier styles allowing the dress bodice to sit closer to the natural waistline. The dressmaker has also maximised the vivid geometric arrangement of the fabric, making a highly effective use of different directional placement of the stripes to emphasise the fashionably fuller bust and narrow waist of the style.

Jane wears a narrow flat lace collar at the neck of her gown, fastened with a large oval [agate/hair] brooch in a chased gold setting, rimmed with seed pearls or diamonds, above sheer dark red [silk organza] ribbon streamers cascading over a panel of carefully-aligned chevrons pieced along the centre front seam of the bodice corsage, with pleats fanning up from the waist on either side forming a V-shaped ‘plastron’ spreading over the sloping shoulder line and strengthening the overall geometric impact of her dress, the chevron band continuing down the front of the full spreading skirt with panels of vertically aligned stripes on either side pleated into the pointed waistline.

Her ‘pagoda’ sleeves are cut on the cross grain, again maximising the boldness of the overall design, and worn with white undersleeves closed at the wrist. Adding to the richness of the textile display, draped around her lower back and forearms Jane wears an expensive imported wool shawl of variously-coloured woven striped bands patterned with paisley motifs. She also displays an engagement ring and wedding band in her left hand and a long, fine gold chain around her neck, hanging below her waist, perhaps suspending ‘pince-nez’ spectacles.

Her centre-parted grey hair is arranged in long side ringlets in a somewhat dated style – perhaps holding onto the hairstyle of her youth which was a common affectation of older women – and covered with an elaborate indoor cap of white silk (blonde) lace, trimmed with silk floss fringe and a pair of long [handmade] lace lappets [possibly antique] hanging down over her shoulders on each side.

Jane Allen, nee Bowden, (1807-1893) was a daughter of Wesleyan schoolmaster Thomas Bowden, and came to Sydney in 1811, aged 4. On 24 July 1823 she married George Allen (1800-1877) who had arrived in the Mary Anne in January 1816. The first solicitor to receive his legal training in the colony, Allen was the founder of the oldest legal firm in Australia (Allen, Allen & Helmsley). Articled to Frederick Garling in July 1817, George was admitted to practise as a solicitor on 24 July 1822. His first office was on the corner of George and Hunter Streets, and later in Elizabeth Street from 1825. He was appointed an MLC in 1856.

George Allen joined the Methodist Society in 1821, and was soon a leading member, becoming intensely religious. By 1831 he owned three houses in Sydney, held an estate of thirty acres (12 ha) at Botany Bay, and had acquired ninety-six acres (39 ha) three miles out of town at the Glebe, where he built a large house known as ‘Toxteth Park’, in which he would live with his family of fourteen children – comprising five sons & five daughters surviving to adulthood – for the rest of his life. A visitor to the estate in the 1870s described ‘a large gathering of distinguished people, the ladies dressed as well, perhaps as expensively as the ladies of New York’ and Mrs Allen as ‘the pleasantest, most amiable and motherly lady’. Jane Allen lived on the Toxteth Estate for 60 years and survived her husband for 16 years.
See also: George Allen journals, 1819-1875 (MLMSS 477)

ARTIST
James Anderson (d. 1882) was a prolific portrait painter of many important colonial subjects in the mid to late 19th century. Born in Belfast, Northern Ireland, by 1858 Anderson was in Sydney, exhibiting a portrait of the American consul, Mr Merrill, at Buist’s shop in George Street which the Sydney Morning Herald praised as a ‘clever and effective portrait … by an artist who has only recently arrived from Victoria to follow his profession in this colony’. (30 October 1858)

By 1860, Anderson’s studio was above Peek & Fotheringham’s George Street Auction Rooms. Inspecting Anderson’s portrait of William Macpherson, a reporter from The Southern Cross stated that it had, ‘all the accessories of skilled art, careful drawing, delicate manipulation, masterly effects, of light and shade, [which] render the study … valuable as a work of art independently of its worth as a faithful likeness’. 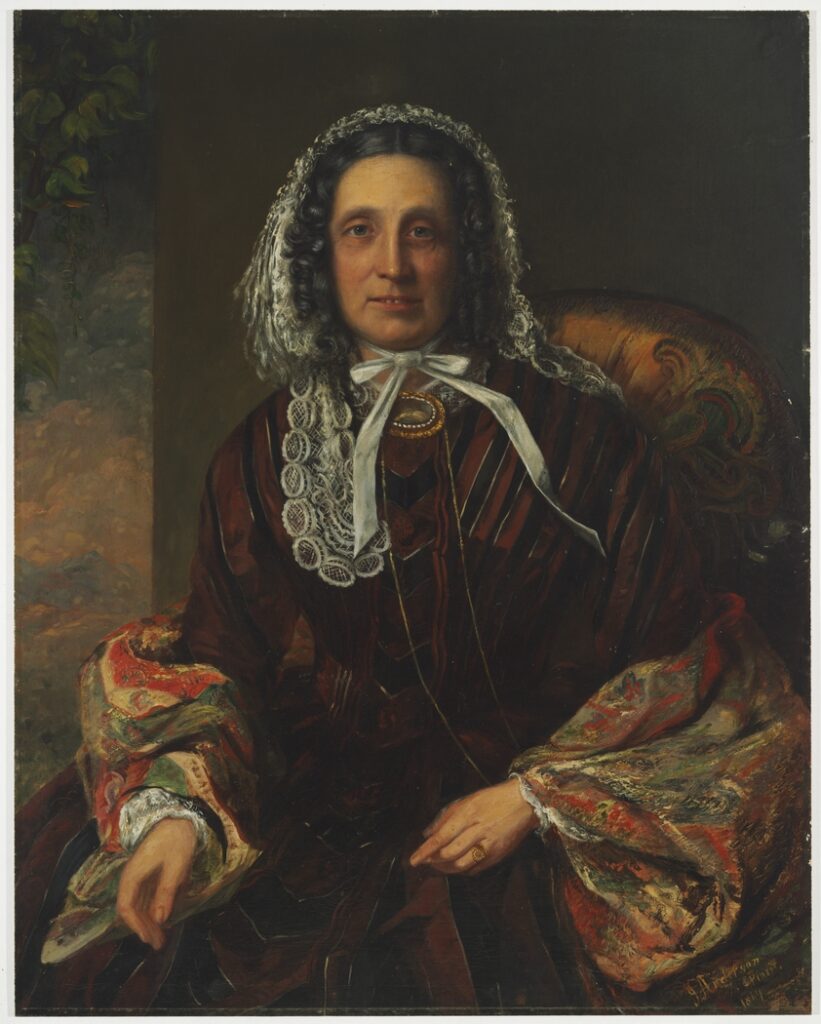