This front facing ¾ length portrait shows successful Sydney baker Alexander Smail, aged about 44. The subject is conventionally posed, seated on a brown (probably cedar) wooden chair with a yellowish curtain drapery behind. The artist, Joseph Backler, was an emancipated convict who became a prolific and highly regarded portrait painter. With a client base drawn from those who had prospered in the colonies (publicans, builders, millers, ship-owners, shop-owners and farmers) and using well-established stylistic devices, the most distinctive feature of Backler’s work was his careful delineation of his subjects’ faces which did not always tend to flattery.
Alexander Smail is dressed, as befits his successful colonial status, in an elegant three-piece suit of dark formal business clothes comprising a well-tailored, double-breasted frock coat of fine black [wool] with a fitted shoulder line and unusually wide, ‘square’ notched lapels – a type of wide ‘M’ notch also known as a ‘lark’ or ‘thrush’ tongue notch – and fitted sleeves with a seam above the split cuffs. He wears matching black cloth trousers and a low, V-necked waistcoat.

His gold watch chain with dangling fob seal is anchored at the waist through the single-breasted button fastening, below a wide expanse of snowy white linen, the shirt with a starched front and concealed button closure, and a high collar encircled by a dark [silk] cravat tied in a flat bow. He wears his light brown hair brushed back from his forehead, with a side parting and curling over his ears, his long side whiskers extending below clean shaven cheeks and chin.

Although ready-made suits were available in the colony at this time, it is probable that Alexander Smail’s suit is ‘bespoke’ (ie. literally ‘spoken for’) and tailored to his exact specifications. Tailoring perfection has always comes at a price which, in itself, implies status. The tailor’s craft produces perfectly-fitted clothing adapted for each client. Made from the finest cloth, each garment is built to the customer’s exact measurements and requirements.

There were usually three fittings and many hours would be spent in hand-sewn construction to mould and shape garments with padding, stiffening and carefully positioned fastenings. Acquisition of this type of expensive and fashionable suiting (and the commissioning of this portrait) could be seen as indicators of Smail’s intention to enter local government politics and public office, an ambition he subsequently achieved in 1864.

In 1844 Smail set up a bakery business in Bathurst Street, moving the bakery to Argyle Street at Miller’s Point in 1851, where he remained in business until his death in 1867. He was elected Alderman for Gipps Ward from 1 December 1864 to 4 September 1867 and died on 8 October 1867. At the time of his second wife’s death in 1870, Mrs Smail owned a store and bakehouse and two allotments on the north side of Argyle Street, a parcel of land on the south side of Argyle Street, Millers Point, and 10 acres at Clarence Town, near Maitland.

ARTIST:
Joseph Backler (1813?-1895), convict artist and portrait painter, arrived in Sydney in the Portland on 25 May 1832. Convicted in 1831 for uttering forged cheques, the 18-year-old was sentenced to death, later commuted to transportation for life. Indents described him as being able to read and write and a landscape painter by profession. Continually in trouble, Backler was eventually granted a ticket-of-leave in February 1842. From 1843 he was assigned to frame makers and carvers Messrs Cetta & Hughes in Sydney and granted a conditional pardon in 1847. In 1843 Backler advertised his services as a ‘Portrait, Miniature and Landscape Painter, in oils and watercolours’. Backler was probably the most prolific of all oil painters in early colonial Australia and more than 120 of his works have survived. 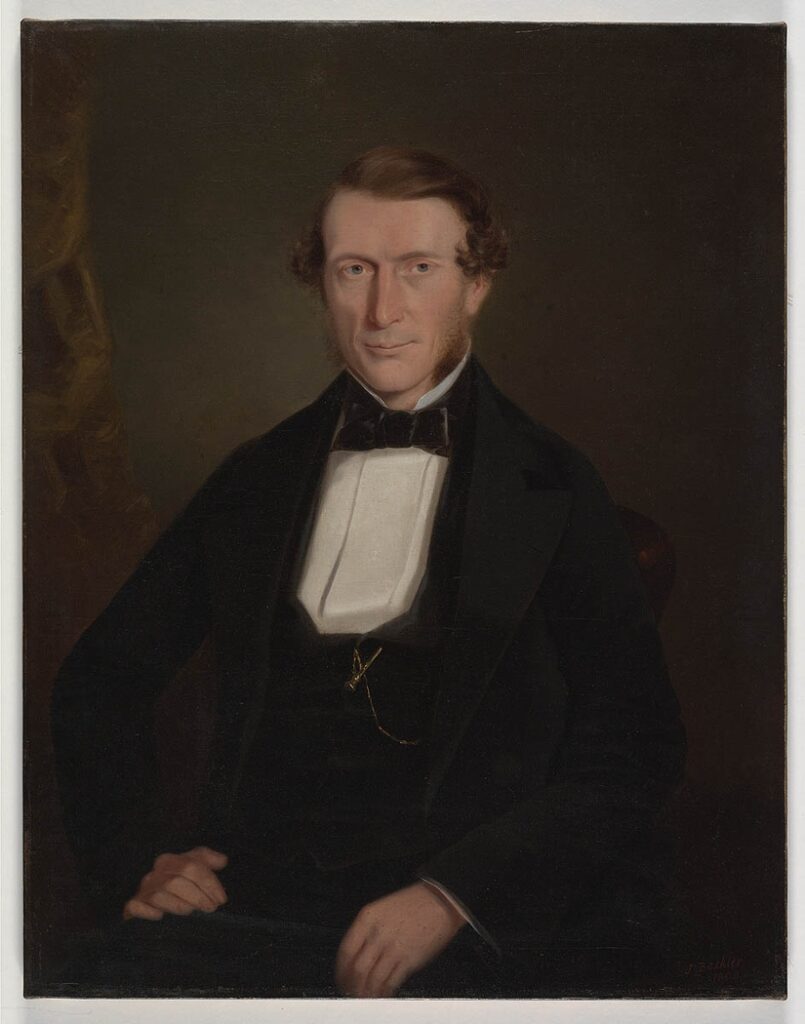